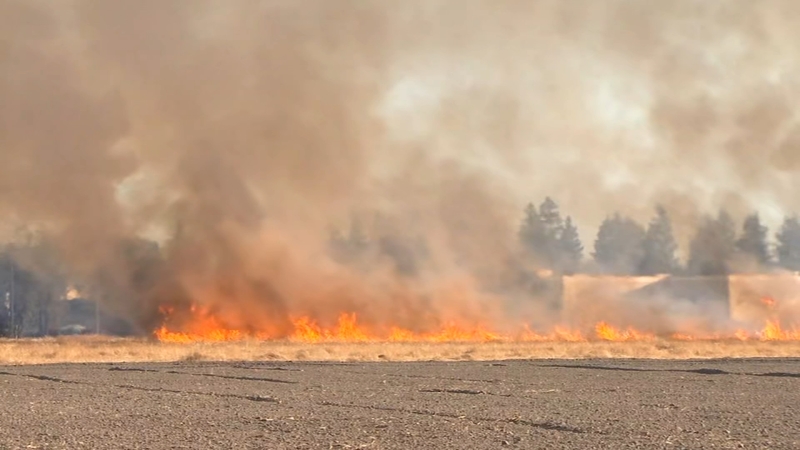 Funding for tax rebates, business grants, education, jobs were all pitched by Gov. Gavin Newsom to the State Legislature in his his $100 billion budget proposal, which includes a series of programs he's calling the California Comeback Plan.

The budget package would be funded primarily using California's $75.7 billion operating budget surplus, with the remaining $26 billion coming from the federal government.

The Governor spent the last week touring the state to highlight elements of his recovery package, and on Friday, he detailed them further.

Newsom announced earlier this week rebates for taxpayers where the state would spend $12 billion to send out $600 payments, which two out of every three Californians would be eligible to receive.

RELATED: Where is my Golden State Stimulus check? Find out if you're eligible here
EMBED More News Videos

The Golden State Stimulus is another one-time payment for Californians. You could receive $600 or $1,200.

The Golden State Stimulus relief package includes families who earn up to $75,000. Households with kids could also receive an extra $500 as well as ITIN filers.

Billions of dollars would also go toward paying past due utility bills and missed rent payments for those in need. Another $300 million was proposed to help forgive traffic fines and fees for low-income Californians from January 1, 2015, to June 30, 2021.

The Governor's plan also puts $12 billion to increase housing for California's homeless through the state's "Homekey" and "Roomkey" programs and to aim toward family homelessness with more rent support.

The funding would also be used to clean highways and public spaces, with the goal of providing thousands of jobs for at-risk youth and those who were formerly homeless. $1.75 billion dollars was also proposed to go toward creating affordable housing units and assistance.

The Clean-up California initiative would also provide $40 million in grants to incentivize local governments to boost community arts and cleaning up local spaces.

Newsom said $1.1 billion would also be used to rebuild the state's mental health system and another $4 billion to go toward helping Californians up to 25 years old. The goal is also to develop student mental health screenings and providing more programs for students suffering from stress, substance abuse and psychological disorders.

Newsom said he wanted to "transform the public education system" and called for billions of dollars for California schools.

Among those plans includes reducing class sizes, adding more before and after school programs in low-income communities and adding a universal meal program.

He also announced the proposal for a universal pre-K program by 2024. There would also be funding to help school districts recruit more teachers and classified employees.

School districts will be able to tap into another $2 billion to safely reopen their campuses to students by next fall. Newsom has said he expects schools to return to in-person learning full-time by August.

$4 billion will be provided in grants for businesses hardest hit by the pandemic. He also proposed more grants and tax credits for business owners who move their companies to California, including a special $30 million tax credit for filmmakers.

Another $147 million in tax credits was also available for small businesses that have hired or are looking to hire employees.

Part of the California Comeback Plan would provide $3.1 billion toward rail and transportation improvements and another $4.2 billion to the state's long-uncompleted High-Speed Rail project.

The proposal also calls for spending $3.6 billion to expand the California workforce, including a new grant program for those who have lost their jobs during the pandemic to be used to go back to school or start a business.

It also includes $35 million over five years to pay for "universal basic income pilot programs." The idea is to give poor people money each month to help ease the stresses of poverty that can make it harder to find full-time jobs and stay healthy.

He also wants to spend billions of dollars on drought response and water infrastructure. Earlier this week, he declared drought emergencies in 39 more counties across the state.

The budget proposal also includes $2 billion to purchase new firefighting helicopters based on the military's Black Hawk and improve forest health as part as the state's wildfire and emergency response.

Newsom's budget directs $3.2 billion toward his goal of phasing out new gas-powered vehicles by 2053, including subsidizing changing out school buses and public transit buses and commercial trucks.

Newsom's critics, including Republican gubernatorial John Cox, have blasted his comeback plan. Earlier this week Cox said "giving money out on a one-time shot" isn't going to benefit Californians, adding that he should focus on helping the state's unemployed.

The governor said his proposal is an investment in the state.

"I expect that as the economy expands, revenue will continue to grow," Newsom said. "I expect growth... But you have to invest in those growth extensions."

He acknowledged that the state's unemployment rate was still high and said that part of the budget proposal would push funds to update California's EDD website.

Newsom has said this plan will help the state "roar back" after more than a year through a pandemic. Meanwhile, the race among Republican candidates looking to challenge Newsom in a recall election continued to heat up this week, with several candidates taking their campaigns across the state.

The Governor's Office said California health officials were still reviewing the CDC's new recommendations. Newsom said there would be an update on the state's mask requirements later Friday afternoon.

RELATED: EXPLAINER: What fully vaccinated people can, cannot do according to CDC's new mask guidelines

Newsom said that if the state continues to see low positivity rates and increased vaccinations, the state will be on track to fully reopen its economy on June 15 or sooner.