KGO
By Amy Hollyfield
SAN FRANCISCO (KGO) -- London Breed was greeted by a full gymnasium at San Francisco's Rosa Parks Elementary School Thursday morning as she enthusiastically thanked supporters and laid out a plan for the city. Breed could barely get her speech started because the crowd kept cheering and chanting her name.

She grew up a block away from the school and described hearing gunshots and seeing drug deals as a child. She said she never thought the opportunity to become mayor was possible.

Breed said San Francisco is struggling and promised to roll up her sleeves and get to work. Homelessness was the first topic she mentioned. She said she will create safe injection sites and give the homeless the support they need. "It's about treatment on demand. It's about making sure people have a chance to get the support they need," Breed said.

This was set up as a press conference, but questions were difficult as it was more of a celebration atmosphere.

When Breed was asked about who her successor would be on the San Francisco Board of Supervisors, she said that question is for another day.

Officials say the earliest day Breed could assume office as Mayor is July 10.

London Breed speaking and laying out her plan without notes. The crowd loves it. pic.twitter.com/Gy7QUfiaeo

A packed room to support London Breed as she gives a speech about what she plans to do as Mayor of San Francisco. pic.twitter.com/aMfMRDLSkf

London Breed giving a shout out to the community that raised her as she gives a speech at Rosa Parks elementary - where she went to school. pic.twitter.com/MAarEPdPf6

“No matter what happened in the campaign- we are all San Franciscans.” -London Breed calling on the city to come together to get the job done. 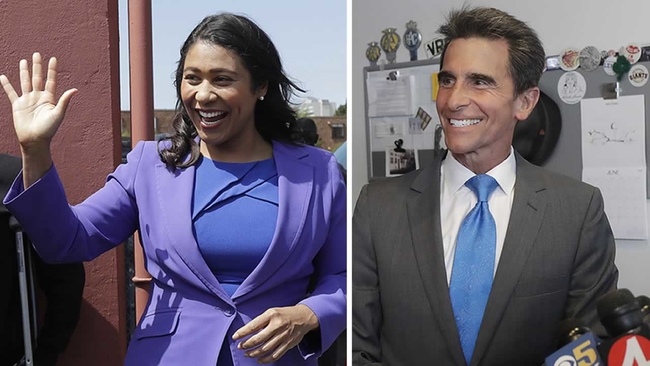