Mark Leno pulls ahead of London Breed in ranked-choice voting 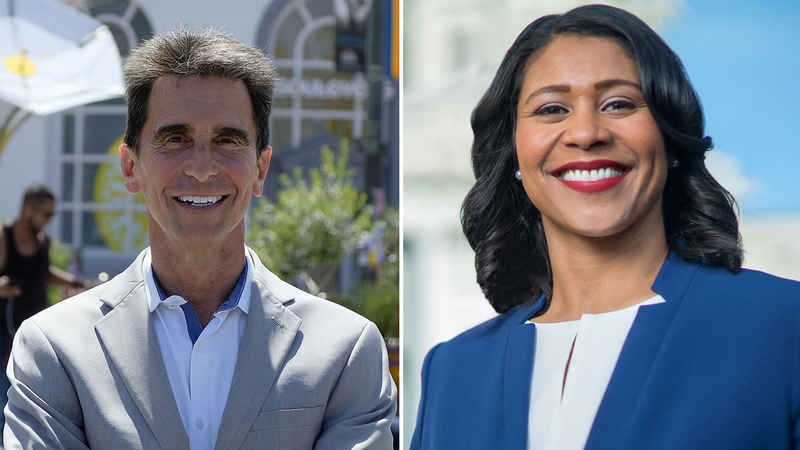 SAN FRANCISCO (KGO) -- The race to see who will become San Francisco's next mayor is still up in the air as of Wednesday morning with former state Sen. Mark Leno holding a narrow lead over Board of Supervisors president London Breed.

However, once San Francisco's ranked-choice voting system was taken into account with voters selecting their top three choices, Leno took the lead early this morning with 50.42 percent of the vote compared to 49.58 percent for Breed with more ballots yet to count.

The city's mayoral race had several high-profile candidates, including Supervisor Jane Kim and former Supervisor Angela Alioto. The race was prompted by the unexpected death of Mayor Ed Lee in December.

Following his passing, Breed served as both acting mayor and Board of Supervisors president. However, once she announced she would run for mayor, progressive supervisors pushed for the appointment of a "caretaker" mayor who was not running.

Citing Breed's dual position as board president and District 5 supervisor, some supervisors argued that having her act as mayor not only gave her an unfair advantage in the upcoming election but also violated the separation of powers envisioned in the city's charter.

Supervisors eventually voted for then-Supervisor Mark Farrell to be mayor, with his swearing-in taking place in late January.

San Francisco native Breed, 43, grew up in public housing and previously worked as executive director of the African American Art & Culture Complex. She was first elected to the Board of Supervisors in 2012 and was re-elected in 2016.

Leno, 66, served as a San Francisco supervisor from 1998 to 2000, before being elected to the State Assembly in 2002 and then the state Senate in 2008.
The winner of the mayoral race will serve the remainder of Lee's term, which runs through January 2020.

In the race for the city's District 8 Supervisor, City College of San Francisco trustee Rafael Mandelman appears to be the winner, beating incumbent Supervisor Jeff Sheehy, a longtime HIV and AIDS activist and the city's first openly HIV-positive supervisor who was appointed by Lee after Scott Wiener was elected to the state Senate.

Mandelman, an affordable housing attorney, earned more than 60 percent of the vote, according to preliminary results.

"I've spent the last twenty years getting to know the residents of the District 8 -- learning about their kids' schools, their favorite dog park and the issues that keep them up at night," Mandelman said in a statement. "The people who live in this district care deeply about their neighborhoods and their commitment inspires me to be the dedicated supervisor they need."

Because Mandelman is filling out the remainder of Wiener's term, Mandelman will again run for the seat as an incumbent this November for a four-year term.

"I'm taking my November reelection very seriously. I've been fundraising for that race for over a year and have a significant war chest built up," he said.

In a statement on Twitter tonight Supervisor Jeff Sheehy said, "Thank you to the late mayor, Ed Lee for the incredible honor of my appointment as District 8 supervisor."

"I am proud to have served the residents of District 8 and the city and county of San Francisco," he said.