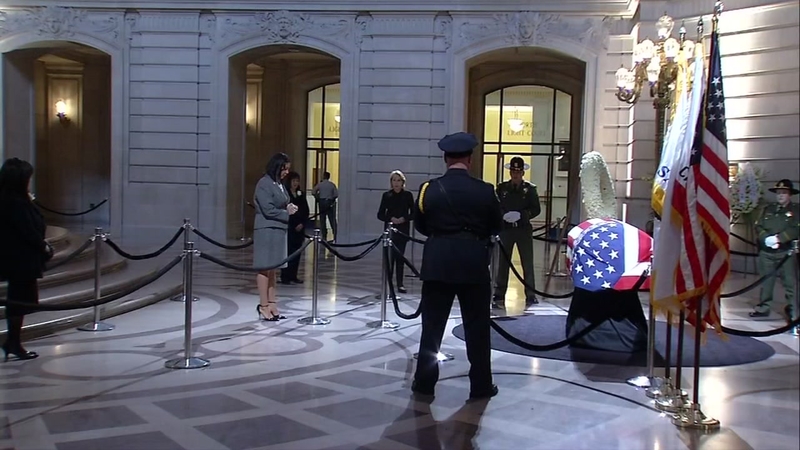 SAN FRANCISCO (KGO) -- A large crowd has gathered to pay their respects to Mayor Ed Lee at a public viewing at San Francisco City Hall.

The mayor's body was taken from Duggan's Serra Mortuary in Daly City early this morning. The procession started on I-280 and went through San Francisco city streets. Lee's flag draped casket arrived at San Francisco City Hall just before 7 a.m.

The men who were with him every day, every moment, during his life as mayor, his security detail would now serve as his pall bearers. Two of them were with him when he collapsed Monday night in Safeway. Today, they carried his coffin in to city hall. A line then quickly formed of people who wanted to be first inside to say goodbye.


TIMELINE: A look back at the career of SF Mayor Ed Lee

"He was really loved. So many people are in shock that they want to acknowledge his passing," said Jody Monahan, Public Works employee.

His casket was placed in the rotunda surrounded by flowers. Volunteers from the San Francisco Symphony played as well wishers started to stream by. Fire Chief Joanne Hayes-White consoled the mayor's chief of staff, who broke down in tears at the sight of the coffin. Acting Mayor London Breed stood alone before the coffin; she bowed her head and silently said goodbye. Members of the public then started flowing in, everyone solemnly pausing, some praying, some crying. Outside, well-wishers described the moving moment they had.

"Very solemn, it was great so many people came out and paid respect for him. Because they know how much he has done for the community of San Francisco," said Eva Cheng, San Francisco resident

Other dignitaries who came through this morning include the police chief, who gave a slow salute to his former boss, and former Mayor Willie Brown. After the viewing, mourners were invited to sign condolence pages that will later be bound together in a book. The messages were sweeping, about what a great mayor, city employee and man he was.

"He really did it all, from his work in the community to his work as the mayor," said Alton Chinn, former San Francisco resident

"Total loss -- the community lost a great leader someone who they could trust and who was very dependable," said Cheng.

The public viewing will be open until 7 p.m.

A memorial continues to grow outside city hall for Mayor Lee. The steps are covered in flowers, pictures and notes in tribute to the late mayor who died suddenly Tuesday morning.

The memorial celebration of the mayor's life will be held Sunday at 3 p.m. at city hall. It is open to the public. If you can't make it, we will have live coverage on ABC7 News.

Click here for the latest stories and videos on the late San Francisco Mayor Ed Lee.