KGO
By by Leslie Brinkley and Lilian Kim 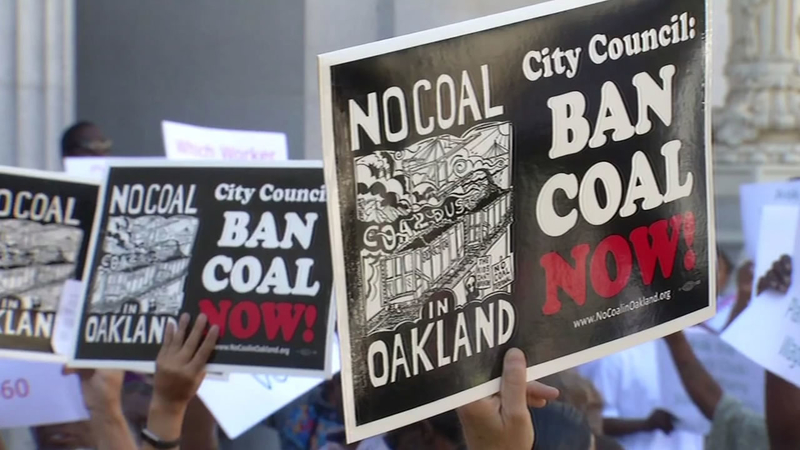 OAKLAND, Calif. (KGO) -- The Oakland City Council voted Monday 7-0 to approve a coal ban ordinance, which would keep coal from being exported from the city.

There were at least 100 speakers lined up, so the final vote took some time.

Earlier Monday, some said coal could bring thousands of jobs to Oakland at a new bulk and oversized rail terminal at the port as part of the redevelopment of the Army base.

Others said the coal, coming from Utah on its way to Asia would bring along hazards to residents, workers and the environment. The city launched health and safety studies. "Multiple analysis show that there are substantial health impacts to a lot of people in Oakland, including workers in Oakland who might live or work nearby where Coal might be stored or handled," Oakland City Councilmember Dan Kalb said.

"Even short bursts of fine particles, which would be coming from the coal dust have very serious effects in terms of asthma, mortality and hospitalization," Former EPA Chief of Air Pollution Epidemiology Director Bart Ostro, M.D., said.

The mayor who is out of town, cosponsored a new ordinance to prohibit the storage and handling of coal anywhere in Oakland. "The agreement we have with master developers of the Army base did not ever specify specific commodities and it did recognize the city's right to adopt appropriate health and safety measures to protect workers as well as nearby residents," Oakland Mayor Libby Schaaf said.

But a spokesperson for the coal industry sees it differently. "The city has no legal right to go back on a signed contract, which is has with the developer and secondly to begin cherry picking commodities that it doesn't happen to like today," Oakland Bulk and Oversized Terminal spokesperson Larry Kamer said.

The proposed bulk terminal would have been right next to the Bay Bridge toll plaza. Officials said safer commodities could be processed instead and Oakland could put a dent in climate change. "If coal is not shipped from Oakland it's not likely to be shipped from anywhere on the West Coast," Public Health Institute spokesperson Linda Rudolph said.