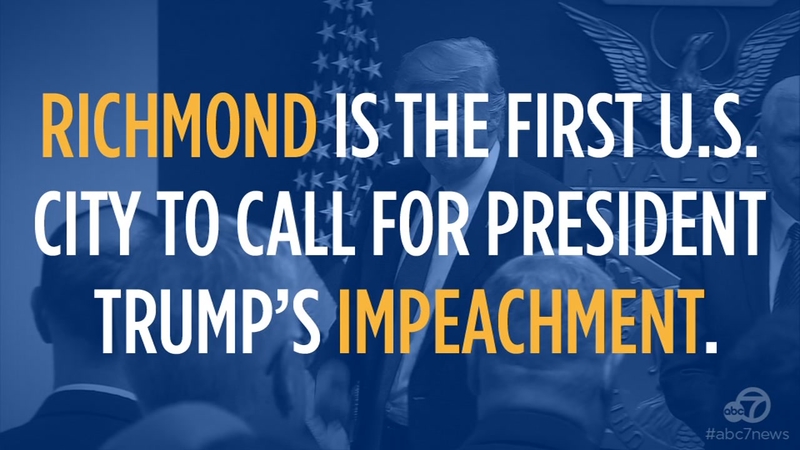 RICHMOND, Calif. (KGO) -- The first 100 days of the Trump administration aren't even over yet and Tuesday the president is already facing calls for impeachment, but it's not from congress--instead, a Bay Area city made a bold move.

RELATED: Trump tries to move past controversies, into legislating

Richmond City Council says Richmond has become the first city in the country to go on record in support of impeachment hearings for President Trump.

The council acknowledged how unusual it was to call for the president's impeachment. He's been in office for only a month, but the vote was unanimous.

Councilmember Gayle McLaughlin spearheaded the resolution, which calls congress to investigate the president's business holdings, something his critics believe are grounds for impeachment. "This is our voice," she said. "This is our country. We have a right to speak up."
EMBED More News Videos

Richmond became the first city in the United States to call upon congress to impeach President Trump, citing his business holdings as cause for investigation.

Even in this progressive city, there was one vocal Trump supporter who was eventually thrown out for swearing at the council.

"Actually you don't have a voice because the GOP controls Congress and you people are stupid enough to think Congress will impeach Trump," said Richmond resident Mark Wassberg.

Supporters of the resolution, however; remain undeterred.

"A lot of politicians aren't willing to go on the record to do this because it can go against them," said Richmond resident Ellen Faden. "But as grass roots, as Bernie said, we have to start from the grass roots."

By passing this resolution, the Richmond City Council is now hoping it'll inspire other cities to do the same.