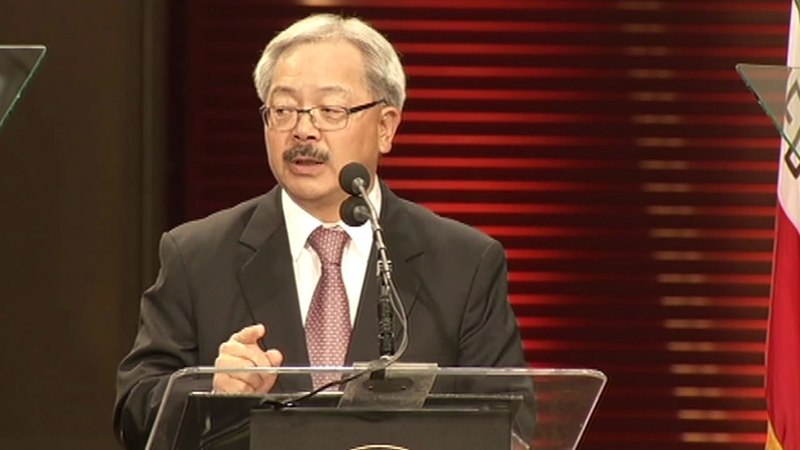 SAN FRANCISCO (KGO) -- San Francisco Mayor Ed Lee delivered the annual state of the city address on Thursday, looking at where the city has been and where he would like it to go. Economically, Lee says the direction is strong. But the challenge he talked about was helping more people participate in good times.

"As long as I'm mayor, we won't leave anyone behind," Lee said.

The mayor outlined what he calls a shared prosperity agenda.

Not surprisingly, the top priority is the housing crisis. Lee is proposing a plan that will need approval from the city's retirement board.

"Starting this year and over the next 10 years we will increase, by $100 million, the down payment assistance program, helping 1,500 families buy a first home in San Francisco," he said.

The mayor also wants to put an affordable housing bond on the November ballot and work with the state legislature on anti-eviction measures.

"I think we've made a lot of progress, but it's an issue we have to keep moving forward on," said housing activist Gail Gilman with Community Housing Partnership.

Nicole Banks was chosen to introduce the mayor because he views her as a symbol of what the city is doing right.

"I thought that I would have to move out of the city but I didn't have to," said San Francisco resident Nicole Banks. "I'm here now, I work here, my kids go to school here."

The mayor mentioned a high quality education as a must to keep the middle class from fleeing, and says he wants to create a universal after school and summer school for children regardless of income.

The mayor also sees Muni as an affordability issue. Google has funded free Muni for low income teenagers for two years. Lee now wants low income seniors and the disabled to hop on at no charge. And he's asking the private sector to again pay the bill, which would cost about $4 million a year.

Nathan Naymen is former director of the committee on jobs.

"I applaud him for staying focused on housing and income inequity," he said.

But Supervisor John Avalos is a critic.

"He has not stepped out and created a new vision for San Francisco," said Avalos. "He has underscored the trajectory we have been on by what the board has been worked on and what voters have approved.