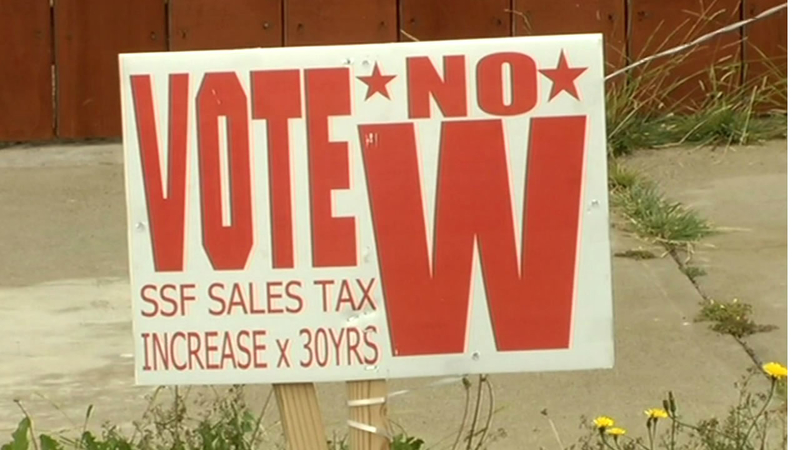 SOUTH SAN FRANCISCO, Calif. (KGO) -- Residents of South San Francisco will go to the polls in a week to consider raising the sales tax from 9 to 9.5 percent. The city council wrote the language for Measure W, but there is some pushback by voters.

Just about every city in the bay Area has a to-do list filled with improvements or repairs deferred due to budget restraints. Voters in South San Francisco are being asked to raise the sales tax to increase revenue over the next 30 years.

Tacking on an extra half-cent to the nine percent sales tax will generate about $7 million to fund a variety of improvements from street repairs to a possible replacement for the police department headquarters, which might not survive a major earthquake. That revenue could also allow South San Francisco to issue bonds.

However, opponents to Measure W worry about the churn in council members and city managers over the 30-year life of the tax.

Measure W opponent Mina Richardson said, "It's too long, too much, and in five years we'll have a new team at city hall, a new team on the council, a new administration, that we really don't know where this money will be spent."

A citizens' oversight committee is written into Measure W to review spending.

Commercial property owner Charles Chavez said, "If it was clearly appropriated to the right... whatever they're going to use it for and there was accountability for that, I think it would... I could trust them."

Vice Mayor Mark Addiego says residents won't be bearing the tax rate hike alone. So will visitors and employees who work here but live elsewhere. He told ABC7 News, "Fifty percent of the total will come from South San Francisco residents, people who visit our town and spend money, and business-to-business sales tax, which is a significant amount in South San Francisco -- will complete that $7 million a year."

However, that doesn't sit well with Mike Nguyen who works in South San Francisco. He told ABC7 News he doesn't think he should have to help pay for the city improvements, since the workers aren't residents.