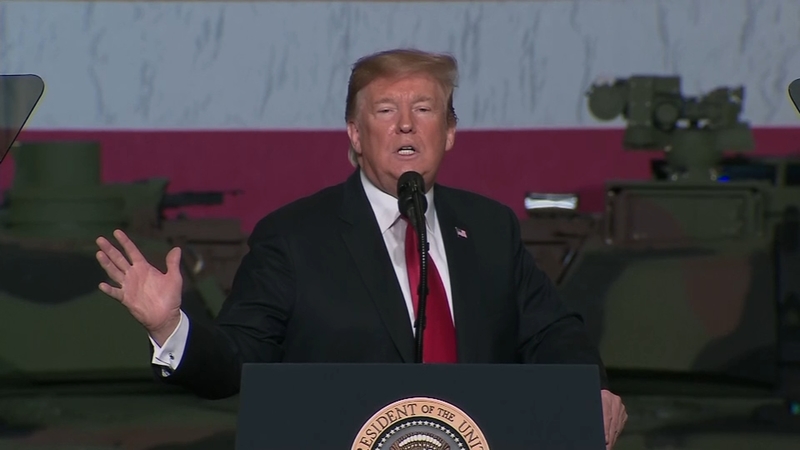 OHIO -- Carrying a bitter personal feud beyond the grave, President Donald Trump escalated his attacks on the late Sen. John McCain, declaring he will "never" be a fan of the Vietnam War hero and longtime Republican lawmaker who died last year of brain cancer.

"I was never a fan of John McCain, and I never will be," Trump told reporters in the Oval Office.

"I gave him the kind of funeral that he wanted, which as president I had to approve. I don't care about this. I didn't get thank you. That's ok," Trump told workers at a tank factory in Ohio on Wednesday.

Pres. Trump on the late Sen. John McCain: "I gave him the kind of funeral that he wanted—which as president I had to approve. I don't care about this. I didn't get a thank you. That's okay." https://t.co/oEDI3NdVLC pic.twitter.com/jMIU6WSfdj

The fresh vitriol followed Trump's weekend tweets insulting the 2008 Republican presidential candidate, with whom he long had a fractious relationship. He repeated some of those attacks, complaining about McCain's vote against repealing President Barack Obama's health care law.

"He campaigned on repealing and replacing Obamacare for years and then it got to a vote and he said thumbs down," Trump said, adding - without citing evidence - that the repeal would have "saved a trillion dollars."

Over the weekend, Trump attacked McCain on Twitter. Among his barbs was that the longtime Arizona senator had been "last in his class" at the U.S. Naval Academy. But while McCain famously racked up demerits and earned poor grades, he ultimately graduated fifth from the bottom of his 1958 class.

"He spends his weekend obsessing over great men because he knows it and I know it and all of you know it - he will never be a great man," said Meghan McCain, on ABC's "The View," which she co-hosts.

Trump targeted McCain during his presidential campaign, saying in 2015 that the former prisoner-of-war was not a hero, "because he was captured." Trump received a series of deferments to avoid serving in Vietnam, including one attained with a physician's letter stating that he suffered from bone spurs in his feet.