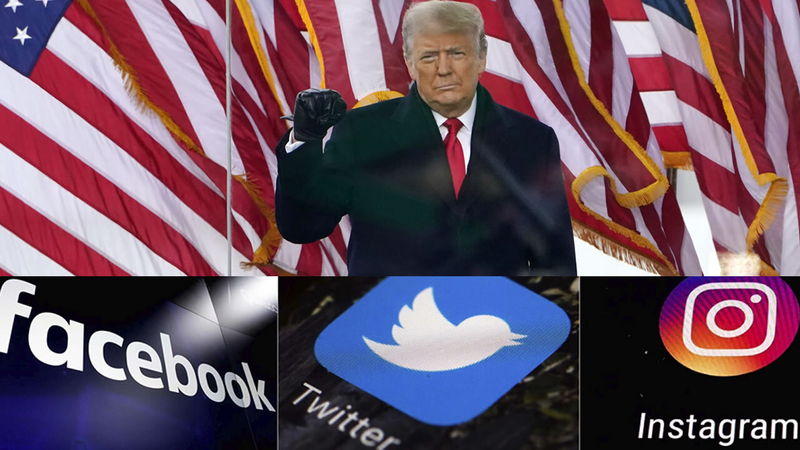 Tech reporter for the Wall Street Journal Sarah Needleman joined ABC7 News at 3 p.m. to unpack the latest on the social media front with regard to the president.

Google and Apple have both pulled Parler from its app stores and Amazon stopped hosting it. Is this the end of Parler?

"It is gonna be a long difficult slog to get back because there was very little notice. They basically had 24 hours to find new servers, so that makes it very difficult for them to operate. Now they're off the app stores, and that is a major hurdle to overcome. So, they're in trouble."

Parler is suing Amazon, on grounds of anti-trust laws. Does it have a strong legal leg to stand on?

"Well, they are saying that they were unfairly booted over politics and antitrust matters. The antitrust part of it might be difficult because it's not like Parler was competing with them directly. Amazon and Parler are in two different universes, so that might be a tough sell. Certainly, it's too early to see how a judge would react, but it is one step that they can take to express their frustration with Amazon and perhaps at some point they can come to an agreement as to how they might work together. Amazon has said that the problem is they feel that Parler is not capable of moderating the content on the platform. Mind you, it is relatively new and small; it's not like Facebook that has thousands of people able to help moderate."

A lot of Parler users are now flocking to Gab now. What is Gab?

"Gab is similar to Parler in that they both have loose restrictions on content. They really let you post just about anything. Gab is associated with the Pittsburg shooting at a synagogue. The person who was responsible for that horrific act had boasted about doing and had planned to do it on Gab. So that is a platform that has its reputation somewhat tainted since that incident."

"Theoretically, he could, but that would be against its rules. The rules say that if your account has been suspended for violating other rules, you cannot do that again. Which is why when he started tweeting from the POTUS account, those tweets were taken down. So theoretically, he could under a false name and using some unknown address, theoretically, but people wouldn't initially know it's him and people wouldn't believe it. He wouldn't be able to get verified because Twitter won't allow him on there. So if he's out there it's a possibility, but we most likely wouldn't know."

How likely is it that Facebook will make quick changes to their algorithms to get people out of echo chambers, which many blame for fueling misinformation and extremism?

"Facebook, just a short while ago, announced it is removing all content mentioning 'Stop the Steal' which is a phrase popular among supporters of President Trump's unproven claims of election fraud. This is the most recent step taken as of today, and there are other steps it's taking to minimize any conversations that could possibly incite violence. And it has taken steps in recent months to add features that would make it more difficult to spread false information or anything that would incite violence."