His "free speech week" event had been canceled. Supporters and protesters sounded off peacefully for several hours before he arrived.

Yiannopoulos' unsanctioned and unsponsored appearance on Berkeley's campus created hours of disruption and discord and it cost the university at least $800,000 in security.

"It went perfectly. I got to say my piece. We were on campus. We're letting Berkeley know they will not deter conservatives; I would have been there if one person wanted to hear me speak," Yiannopoulos said.

Protestors and supporters showed up hours in advance. Some spouted off face to face while others silently made their point. A group kneeled to show solidarity with pro athletes.

Hundreds of officers secured the perimeter and maintained the peace even when the crowd spilled into the street.

Sky 7 was overhead when Yiannopoulos appeared in Sproul plaza surrounded by three dozen supporters who made their way through the rigorous security line.

He sang with the group, took selfies, signed autographs and then left after 20 minutes.

We caught up with him as he walked to his car.

"I think people were absolutely terrified of showing up and getting beaten up, what do you think?" Yiannopoulos said.

"There were extraordinary security measures in place today and obviously we're relieved that it was relatively peaceful and safe at the same time it feels a little bit like the most expensive photo op in the university's history," U.C. Berkeley Spokesperson Dan Mogulof said.

Even though the student sponsored "free speech week" was officially cancelled...the university says it will continue to evaluate security plans over the next few days. 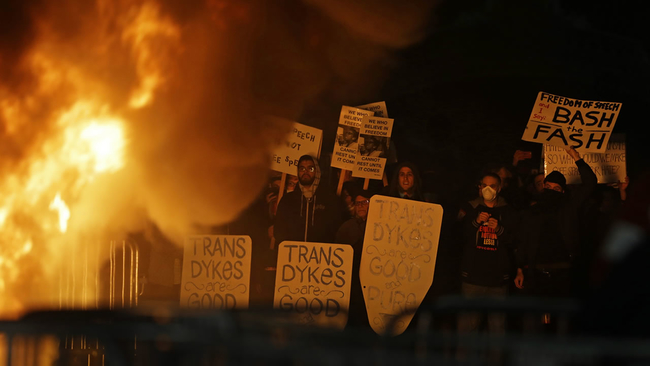