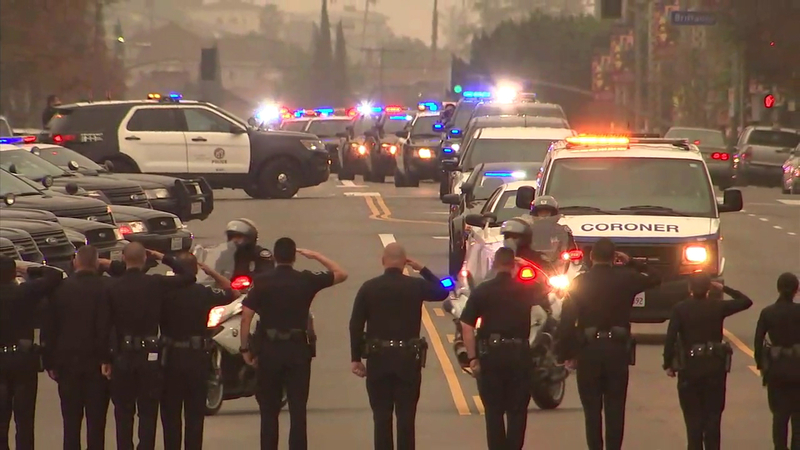 POMONA, Calif. -- A Pomona Police Department officer has died and another has been hospitalized after both were shot during an ongoing standoff with a gunman at an apartment complex, officials announced early Saturday morning.

"It is with a heavy heart that I must report that one officer did not survive," Police Chief Michael Olivieri said on Twitter. "The second officer is in stable condition."

Dozens of law enforcement personnel saluted as the body of a fallen Pomona policeman arrived in a procession at the Los Angeles County coroner's office on Saturday, March 10, 2018.

The fatal sequence of events began shortly after 9 p.m. Friday when the officers responded to a report of a reckless vehicle, and a short pursuit ensued, according to Capt. Christopher Bergner of the Los Angeles County Sheriff's Department.

It is with a heavy heart that I must report that one officer did not survive. The second officer is in stable condition.

After the driver refused to pull over, his truck crashed into a parked vehicle and the officers chased him on foot, Bergner said. The suspect then ran into an apartment in the 1400 block of Palomares Street, near Fernleaf Avenue.

"As he barricaded himself in a bedroom, officers attempted to contact him and he began firing through the door," Bergner said.

Neighbors said they heard a fusillade of gunfire.

The two officers were struck in the shootout; one of them was shot in the head and was carried out to the street by his colleagues, who attempted life-saving measures.

Both officers were transported to Pomona Valley Hospital Medical Center, where the one who suffered a head wound died. That officer was later escorted by scores of law enforcement personnel and firefighters to the Los Angeles County coroner's office as the barricade situation continued at the scene.

The news is tragic this morning as we learn a @PomonaPD officer was shot and killed in the line of duty. Another officer was also shot and wounded. Join us in mourning the loss. Let’s all keep their families and loved ones in our thoughts and prayers pic.twitter.com/53xOy7H5Wy

The suspect's mangled truck, which sustained significant front-end damage, remained near a curb outside the apartment building as a light rain fell.

Several law enforcement agencies were involved in the standoff with the gunman, including members of the sheriff's SWAT and crisis negotiation teams.

Anyone with information about the incident is asked to call the sheriff's Homicide Bureau at (323) 890-5500.