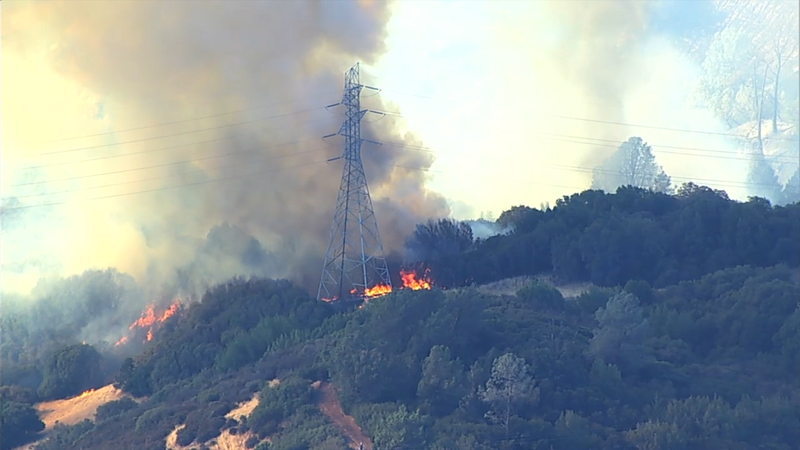 SAN FRANCISCO (KGO) -- PG&E has revealed in court documents how easily its power lines can be brought down, sparking a major wildfire, even just a bird hitting a line can start a blaze. The utility is being criticized on so many fronts, and these new court documents will not improve rate-payers' confidence in PG&E.

In a federal court filing for its criminal probation from the 2010 San Bruno gas pipeline explosion, PG&E told the judge that "its equipment may have contributed" to the Kincade Fire now raging in the North Bay.

RELATED: Gov. Gavin Newsom slams PG&E for mismanagement, greed as cause of wildfire remains under investigation

According to the incident report, filed with the California Public Utilities Commission, "a broken jumper" on transmission tower 001/006 near the Geysers geothermal plant is being eyed a potential cause of the blaze. This is supported by timelapse surveillance video nearby, which shows lights off in the distance, and then flames erupting.

In that same federal court document, PG&E reported that its equipment may have been responsible for the June 25th Lonoak fire in Monterey that charred more than 2,500 acres, saying "a bird contacted a conductor (or power line) causing a fault" that brought the line to the ground.

Former California Public Utilities Commissioner Cathy Sandoval says the state's power infrastructure is so delicate, that a bird can spark a major fire.

RELATED: PG&E tower near ignition point of Sonoma County wildfire was not shut off, had broken equipment

The CPUC has announced what it calls "decisive actions" to hold PG&E accountable for the wildfires and blackouts:

Former commissioner Sandoval tells me it's been difficult to get PG&E to even discuss safety issues, much less make the widespread changes that are needed.