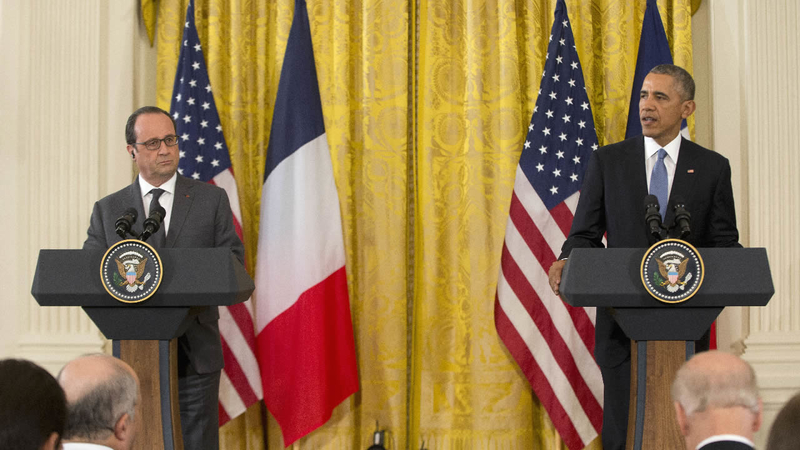 WASHINGTON -- Pledging solidarity after the Paris attacks, President Barack Obama promised Tuesday to work with France and other allies to intensify the U.S.-led campaign against the Islamic State, saying America would not be cowed by the scourge of terrorism. To this point, Obama said, Russia is an "outlier" in the fight.

"We cannot succumb to fear," Obama said, standing alongside French President Francois Hollande after they met at the White House to discuss the anti-ISIS mission. "Make no mistake, we will win, and groups like ISIL will lose."

President Obama: 'We cannot and we will not succumb to fear.' pic.twitter.com/h2ACoMi4SI

Hollande's trip to Washington was part of a diplomatic push to get the U.S. and other nations to bolster efforts to destroy the militant group that has claimed responsibility for the Paris attacks. Hollande emerged from his meeting with Obama saying that France and the United States had agreed to step up a "joint response," including new efforts to target terrorists' financial networks, take back IS-controlled territory, scale up efforts in Syria and Iraq and increase intelligence sharing.

The U.S. and France "share the determination to fight terrorism anywhere," Hollande said, through a translator.

Pres. Obama: "We've seen some success" in fight against ISIS. "The question now is how to accelerate it." pic.twitter.com/IyYfoEcRTr

The French president had planned to urge Obama to work with Russia to build a new coalition to fight the extremists. But Hollande's mission quickly became entangled with the fallout from a Russian military plane downed by Turkey - an incident with echoes of the Cold War. The shootdown underscored what some see as a need for better coordination among the sprawling cast of interests engaged on the battlefields and in the skies above Iraq and Syria. At the same time, conflicting accounts and rising tensions stood to make any closer contact between interests more difficult.

U.S. forces were not involved in the air incident, according to an American military official, who was not authorized to discuss the incident publicly and so spoke on condition of anonymity.

Obama cautioned that information about the incident was still emerging and he discouraged escalation. He added that Turkey had a "right to defend its territory and its airspace."

Pres. Obama after #ParisAttacks "I want you to know that we will continue to do everything...to defend our nation." pic.twitter.com/iJ2YHCDidF

The president said the shootdown underscored an "ongoing problem" with Russia's military operations in Syria, where the Russians have been targeting groups near the Turkish border. The incident also shows a need to move forward quickly on a diplomatic resolution to the conflict in Syria, he said.

Even before the incident between Turkey and Russia, Hollande faced a tough challenge in getting Obama to agree to a partnership with Moscow. The U.S. is deeply skeptical of President Vladimir Putin's motivations, given his longstanding support for Syrian President Bashar Assad.

That skepticism was clear Tuesday as both Obama and Hollande told reporters they would welcome Russia's involvement in the fight - if Moscow were to concentrate its military action on IS.

Pres. Obama: "We cannot and we will not succumb to fear. Nor can we allow fear to divide us." pic.twitter.com/ELfzTUp64Z

Hollande said he would bring that message to Moscow, where he is to meet with Putin later this week. "We do not want to exclude anyone," he said.

Nearly five years of clashes between Assad's government and rebel forces have created a vacuum that has allowed the Islamic State to thrive. The group appears to now be focusing on targets outside its base in Syria and Iraq, including attacks in Lebanon and Turkey and the downing of a Russian airliner over Egypt.

Given the rash of attacks, Obama is now facing increased pressure at home and abroad to ramp up U.S. efforts to destroy the militants. So far, Obama is resisting calls to significantly escalate his approach, and instead is focused on getting other countries to offer more counterintelligence, humanitarian and military assistance.

Pres. Obama says "we're still getting the details of what happened" after Turkey shot down Russian fighter jet. pic.twitter.com/ED6gtOZk7M

"We'll have to pool our resources much more effectively together than we have in the past," Obama said.

The U.S. campaign has centered largely on airstrikes as well as the training and assisting of security forces on the ground in Iraq. Efforts to train and equip moderate rebel groups in Syria have struggled, and Obama has authorized the deployment of 50 special operations forces to the country to jumpstart the program.

France has stepped up its airstrikes following the Paris attacks, relying in part on U.S. intelligence to hit targets in Raqqa, the Islamic State group's stronghold in Syria. British Prime Minister David Cameron said on Monday he would seek parliamentary approval this week for Britain to begin airstrikes as well.

Putin says his country is targeting the Islamic State militants, the U.S. contends Moscow is going after rebels fighting Assad, a Kremlin ally whom the U.S. wants pushed out.

Last week, Hollande called for the U.S. and Russia to set aside their policy divisions over Syria and "fight this terrorist army in a broad, single coalition." But his office acknowledges that "coordination" sounds like a far more realistic goal.

"We are not talking about a command center. We are talking about coordination of methods and exchange of intelligence," a French diplomat said on Monday. The diplomat wasn't authorized to publicly discuss the subject and spoke on condition of anonymity.

Obama and Hollande also discussed the flow of thousands of refugees fleeing the war in Syria. Obama has tried to tamp down fears that terrorists may pose as refugees, and repeatedly has defended his plan to accept 10,000 refugees in the U.S. Hollande warned against identifying migration with terrorism but said that, at the same time, tougher border controls are needed.

"Today people are risking their lives to flee when they travel at sea between Turkey and Greece. It is together with Turkey that we must find solutions so that refugees can stay close to their country of origin," Hollande said.

Said Obama: "Each of us, all of us must show that America is strengthened by people of every faith and every background."

Hollande is slated to travel to Moscow later in the week for meetings with Putin.

Beyond their discussions on military cooperation, Obama and Hollande were expected to discuss diplomatic efforts to achieve a political transition in Syria.

While Russia is backing a new diplomatic effort in Syria, Moscow still refuses to support steps that explicitly call for removing Assad.