President Trump met by protests in Hamptons ahead of controversial fundraiser 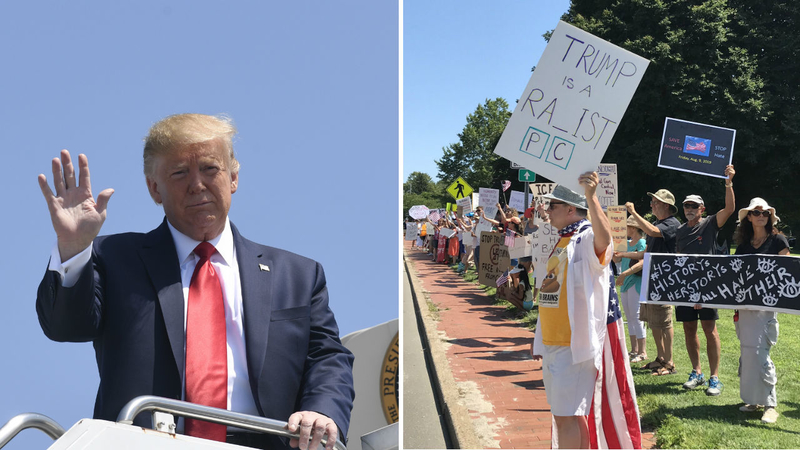 President Trump met by protests in Hamptons ahead of controversial fundraiser

NEW YORK -- President Donald Trump arrived in the Hamptons Friday for a high-priced fundraiser that has sparked controversy and threats of boycotts.

Trump was met with about 30 supporters and 30 protesters when he landed at Grabowski Airport in Westhampton Beach just before noon on Friday.

Long before Trump landed on Long Island, the protests on the East End took off not far from the two fundraisers that were expected to raise millions for the president's re-election campaign.

Demonstrators rally against Trump here in the Hamptons, as he arrives for 2 huge fundraisers this afternoon. They were also met with Trump supporters. But largely peaceful. @realDonaldTrump #trump #demonstrators @ABC7NY #watermill pic.twitter.com/kujGR8E9fo

The fundraiser has left luxury gym Equinox and indoor cycling studio Soul Cycle fighting to retain members. That sparked an online boycott that left some people canceling their memberships.

Stephen Ross, a chairman of the company that owns both fitness chains, is hosting the fundraiser at his Hamptons estate.

The president called Ross "a liberal, if you want to know the truth" and said the controversy surrounding the fundraiser "just makes Steve much hotter."

Trump critics took to Twitter, calling the president a racist and unfriendly to the gay and lesbian community, and asserting that they don't want their money supporting his 2020 presidential campaign.

"Just contacted @Equinox to cancel my membership after many years," tweeted comedian Bill Eichner, who voiced Timon in the latest version of "The Lion King" movie. "If it's too inconvenient for u to trade one LUXURY GYM for another, then you should be ashamed."

Equinox and SoulCycle tried to separate themselves from Ross and his fundraiser.

"We want to let you know that Equinox and SoulCycle have nothing to do with the event and do not support it," the gym operator said on Twitter . "We believe in tolerance and equality, and will always stay true to those values. Mr. Ross is a passive investor and is not involved in the management of either business."

Related, which has real estate developments nationwide, bought Equinox 13 years ago. Equinox later bought SoulCycle. Together, they run about 200 gyms and studios in big cities such as New York, London and San Francisco.

Ross has scheduled the luncheon at his Southampton home. Tickets are priced at $100,000 for a photo opportunity and lunch -- and at $250,000 for a package that includes a roundtable discussion.

Money raised will benefit Trump Victory, which benefits the president's 2020 campaign and the Republican National Committee.

A reception was scheduled to follow the lunch at the 17,000-square-foot Bridgehampton estate of real estate developer Joe Farrell.

Ross issued a statement that read in part:

"I always been an active participant in the democratic process. While some prefer to sit outside of the process and criticize, I prefer to engage directly and support the things I deeply care about. I have known Donald Trump for 40 years, and while we agree on some issues, we strongly disagree on many others and I have never been bashful about expressing my opinions.