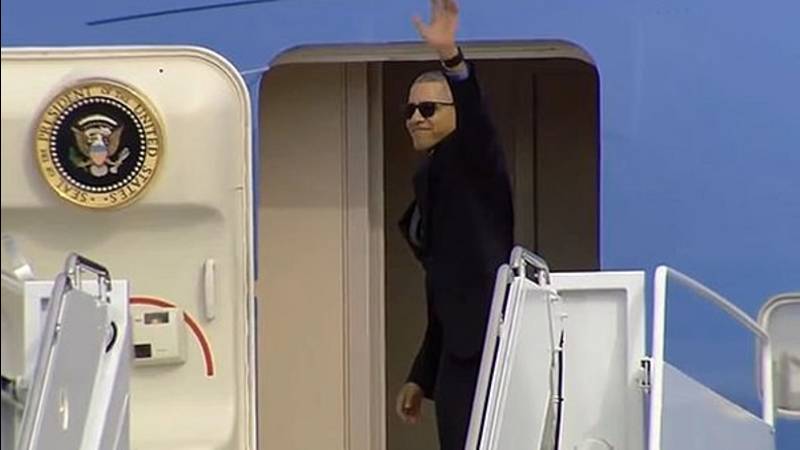 The president made appearances at two Peninsula fundraisers Thursday morning. The first one was in Palo Alto and the other in Atherton. And even though his presidency has only 11 months to go, Obama still draws donors and fans along the motorcade route.

It was supposed to be a secret, but word spread quickly in the neighborhood, so crowds formed to greet Obama.

One person said it feels good having the president in the neighborhood because there's a lot of protection.

School is out already for a long President's Day weekend. A group of friends made t-shirts, each one with a letter of the president's last name. They lined up in correct order and waved at him as the motorcade passed just 12 feet away.

A white tent marked where the president stepped out at the home of Amy Rao and Harry Plant. Rao is the founder and CEO of Integrated Archive Systems. Plant is a communications executive and former venture capitalist.

Their neighbor, who said she's a Republican, saw guests filing into the fundraiser for Democratic senatorial campaigns. ABC7 News has no record of the president's remarks there because the event was closed to media.

However, the president did make on-the-record remarks at his next stop in Atherton at the home of Steve Westly, a venture capitalist and former state controller. Obama said because voters appear to be anxious, political rhetoric can focus on blame instead of bringing people together.

#POTUS may have seen this #atherton vineyard as his motorcade left private fundraiser to go to #airforceone #abc7now pic.twitter.com/X4sF5lsekc