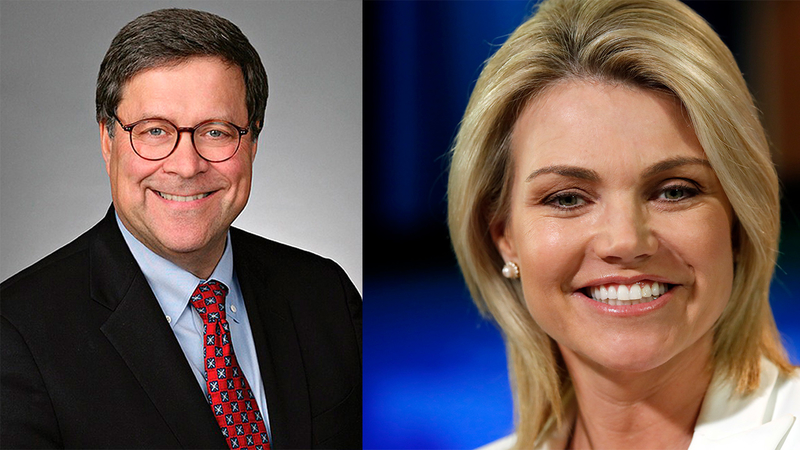 WASHINGTON -- President Trump says he will nominate William Barr, attorney general under President George HW Bush, as his next attorney general and State Department spokeswoman Heather Nauert to be US ambassador to the United Nations.

Trump made the announcement while departing the White House for a trip to Missouri Friday.

Trump says that Barr is "a terrific man" and "one of the most respected jurists in the country" and says, "I think he will serve with great distinction."

He also says Barr was his "first choice from Day One."

If confirmed by the Senate, Barr would succeed Attorney General Jeff Sessions, who was forced out by Trump in November. Sessions' chief of staff, Matthew Whitaker, is currently serving as acting attorney general.

He's also a New York City native, growing up on the Upper West Side. His parents were faculty members at Columbia University, where he received bachelor's and master's degrees in government.

Since leaving government, Barr has worked in senior corporate positions and as a lawyer with a Washington firm.

Nauert is to replace Nikki Haley, the former South Carolina governor who announced in October that she would step down as ambassador at the end of this year.

Nauert is a former Fox News Channel reporter who had little foreign policy experience before becoming State Department spokeswoman. If confirmed by the Senate, she would be a leading administration voice on Trump's foreign policy.