KGO
By Julian Glover
SAN JOSE, Calif. (KGO) -- A couple from Santa Clara is now sick after taking a trip on the Grand Princess cruise ship with a man who died from the coronavirus and is now getting tested for the virus.

Leanne and Robert Cummins of Santa Clara were on board the Princess cruise ship that departed to Mexico on Feb. 11. A man on board that ship was infected with coronavirus and later died, making him the first Californian to die of the virus.

CORONAVIRUS: Tracking latest developments of viral infection in US

After being notified of the man's death by the cruise line, the couple started looking to be tested for the virus - especially since they are falling ill.

The 10-day cruise returned to the U.S. on Feb. 28 and days later on March 4 an elderly man on-board the ship who tested positive for the coronavirus died at a hospital in Roseville near Sacramento.

Cummins said her husband has been very ill in recent days with no appetite, trouble breathing, and a fever at one point as high as 103 degrees. She told ABC7 News they have been self-quarantining at their Santa Clara home. Mrs. Cummins also said at one point she felt weak and fainted.

On Wednesday Cummins said she called the Sutter Health Urgent Care facility in Mountain View looking to be tested for the virus. She was told to go to the emergency room at her local hospital.

She reached out to the emergency room at El Camino Hospital in Mountain View which then told her to call her doctor. She said her doctor then told her to go to Santa Clara Valley Medical Center to get tested. She said she called Valley Medical Center and was told that the hospital did not have any test kits and would not be conducting any testing for the coronavirus. She was told to call the CDC.

RELATED: What to know about COVID-19 in Calif., how it's affecting San Francisco Bay Area

On Thursday, Mrs. Cummins said she did exactly that and a CDC representative told her to call the California Department of Public Health. She did and was told to call the Santa Clara County Health Department. She made that call and reached an answering machine.

ABC7 News has also tried several times to speak to a public information officer at Santa Clara County Health Department in reference to where someone concerned about exposure to the virus should go for testing and was unsuccessful.

After numerous calls a non-public health employee who was assigned to answer phones told ABC7 News that Mrs. Cummins should call her primary care physician back and have the doctor call the public health provider intake line.

Again, still no answer as to where the couple should go to get tested.

Both Leanne and Robert Cummins still work so they are worried that if they are in fact carrying the virus they could have unknowingly infected a number of other people. Mrs. Cummins said it wasn't until Wednesday that she received notice from Princess Cruises stating that she was on-board a cruise ship with a passenger who tested positive for coronavirus.

She believes the state should be more proactive in testing all of the passengers on-board the same cruise as that California man who died this week. 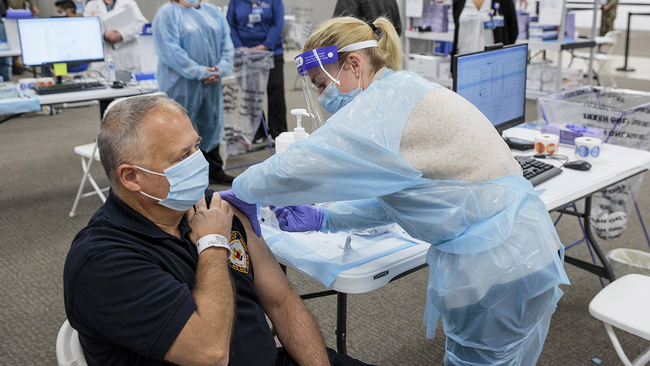