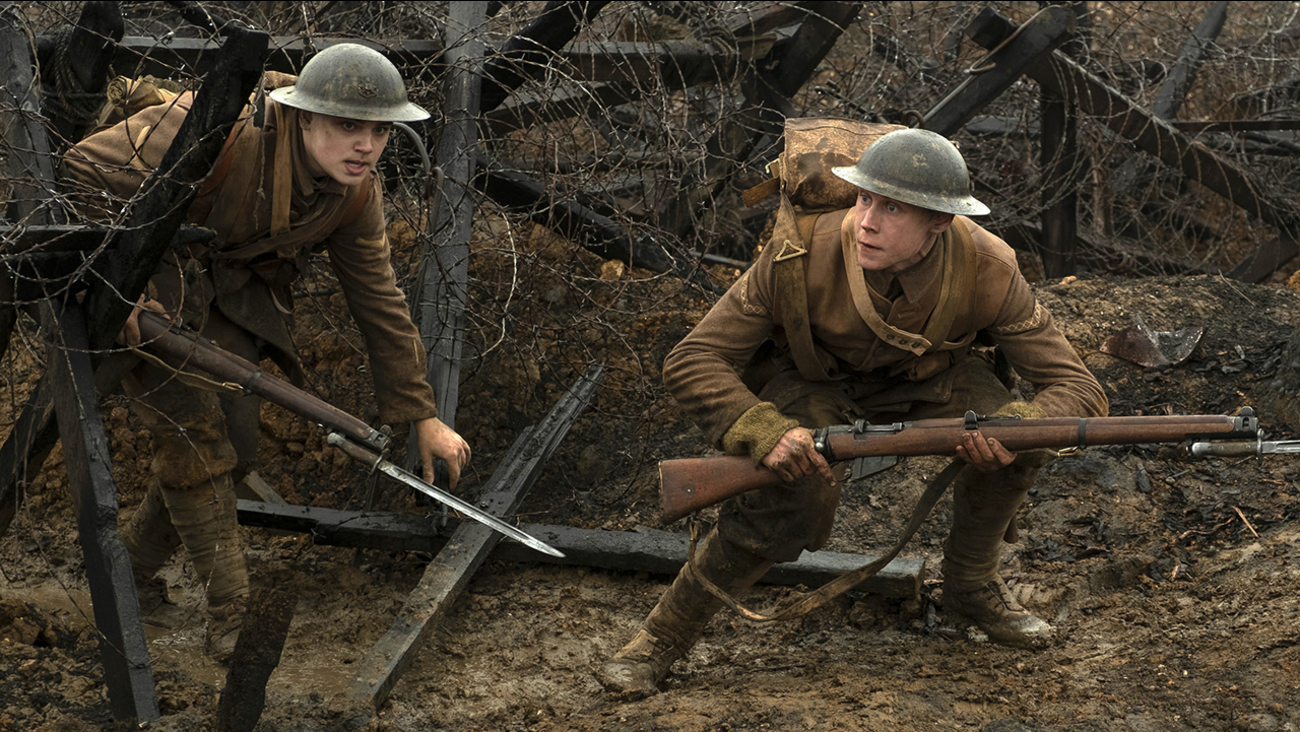 LOS ANGELES -- If the Producers Guild Awards are a true predictor of the Oscars' best film category, then the World War I film "1917" is poised to come away with the top honor in a few weeks.

The Sam Mendes film won the award for theatrical motion picture at the untelevised ceremony Saturday night at the Hollywood Palladium in Los Angeles. Many in the crowd seemed stunned after Reese Witherspoon announced the winner of the Darryl F. Zanuck Award, which has gone on to win the best picture Oscar 21 out of 30 times - including the past two years, with "Green Book" and "The Shape of Water."

"This film was inspired by my grandfather, Alfred Mendes, and my hope was to honor his experience," said Mendes, who co-produced and directed the project. He also said it was his first time attending the awards, and thanked the guild for recognizing his film.

"This was best experience of my professional life," he added.

Released late last month, "1917" has made a splash during awards season, including another surprise victory in the best drama picture category at the Golden Globes.

At the PGA awards, the war film bested other contenders like "Ford v Ferrari," "The Irishman," "Jojo Rabbit," "Joker," "Knives Out," "Little Women," "Marriage Story," "Parasite" and "Once Upon a Time in ... Hollywood." "1917" has now built strong momentum heading into the Academy Awards on Feb. 9.

Multiple special honors were given out throughout the evening for production work including to Octavia Spencer, Netflix's chief content officer Ted Sarandos, "Friends" co-creator Marta Kauffman, the film "Bombshell," and Plan B Entertainment's Brad Pitt, Dede Gardner and Jeremy Kleiner.

"When I started off as an actor, I wondered about producers, 'What the (expletive) do they do?'" Pitt jokingly said after accepting the David O. Selznick Achievement Award in Theatrical Motion Pictures. Plan B has been behind "Moonlight" and "12 Years a Slave."

"I'm now painfully aware of what you do," he said. "I commend you all. Our job as producers are protectors, stewards. ... Stewards of the story and protectors of the storytellers. And I find that to be an awesome responsibility."

Spencer received the Visionary Award, struggling to deliver her acceptance speech through tears. The actress who starred in "The Help" and "Hidden Figures" said acting was her backup plan to being a producer, which was "the dream" for her.

"As an actor, I learned that my job was to find the truth in every scene and bring humanity to the characters I portray," said Spencer, who runs the production company Orit Entertainment with Brian Clisham. Their company has produced the Apple TV Plus drama series "Truth Be Told," and Spencer is starring in and producing an upcoming Netflix limited series about Madam C.J. Walker.