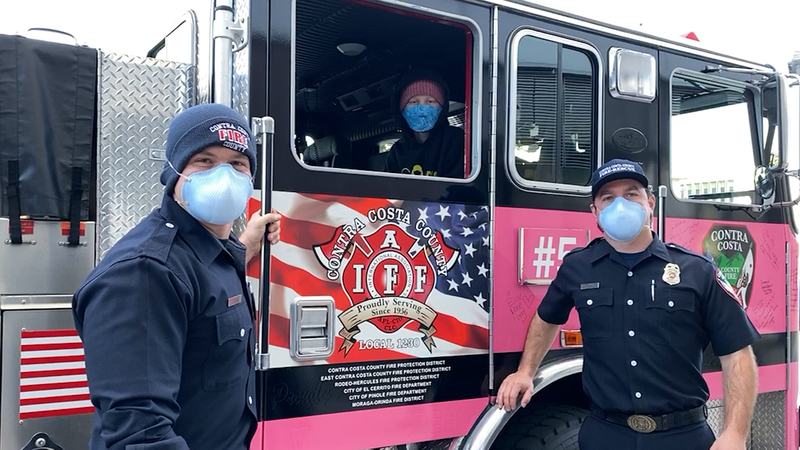 MARTINEZ; Calif. -- In California, Contra Costa County Fire Protection District has teamed up with United Professional Firefighters of Contra Costa County, Local 1230 to show their support for those who have been impacted by cancer.

"This is going to help people that are stricken with cancer in a multitude of ways. The purpose behind this whole thing is to let people know that they are not alone. There are people out there that are pulling for you and there's people out there that are willing to fight for you," said Chris Leimpeter, Fire Captain in Contra Costa County. "Your firefighters are here, not just on a 9-1-1 basis. Were moms, were dads, were brothers. We are all things that they are as well."

Project Pink Wheels was launched in October 2020 as a vehicle of hope for the Contra Costa community. Volunteer fire firefighters will drive a bright pink KME fire engine and escort cancer patients to their first or last cancer treatment within Contra Costa County.

Leimpeters wife, Amy, was diagnosed with breast cancer in 2005 and received an overflowing amount of support from his community. After his wife survived her fight against cancer, his goal was to pay it forward by being that sign of support for his surrounding community.

14-year-old Brandi Pico started feeling pains in her leg in March of 2020. After thorough testing, Pico was diagnosed with Ewing Sarcoma, a rare bone tumor.

"People we don't know have come out and shown their support," said Tracy Pico, Brandis Mother. "A lot of people reaching out, offering help, and making dinners for us. Just having that support has meant a lot to us."

"It is kind of that community bonding vehicle where it shows the community that were here for you," said Leimpeter. "We understand the battles and the struggles that you are going through. We just want to be a sign of support, a sign of strength, a sign of hope. That your fight, even though you're going through it, we are there with you."
Report a correction or typo
Related topics:
community journalistcommunity strongfire departmentslocalishbe localishkgobe localish bay areacancer carevolunteerismsurvivor storycommunityfirefighterscancerfeel good
TOP STORIES
Feds launch investigation into San Mateo County's PPE debacle
How concerned should you be of new omicron subvariant BA.2?
Snapshot of 49ers' memory-keeper during 2021 playoff run
Hunt for 'The Doodler,' 1970s serial killer who targeted gay men
COVID-19 updates: SF to change indoor mask rules
Teen loses thousands on Zelle after getting offer to be a 'sugar baby'
Expert explains why new COVID variants may keep popping up
Show More
WATCH TOMORROW: 49ers-Rams NFC Championship Game preview
49ers-Rams NFC Championship could break ticket record
Oakland's own Amy Schneider reflects on historic 'Jeopardy!' run
California representative pushing for 4-day workweek in new bill
NatGeo debuts 'Into the Depths' podcast on search for slave shipwrecks
More TOP STORIES News