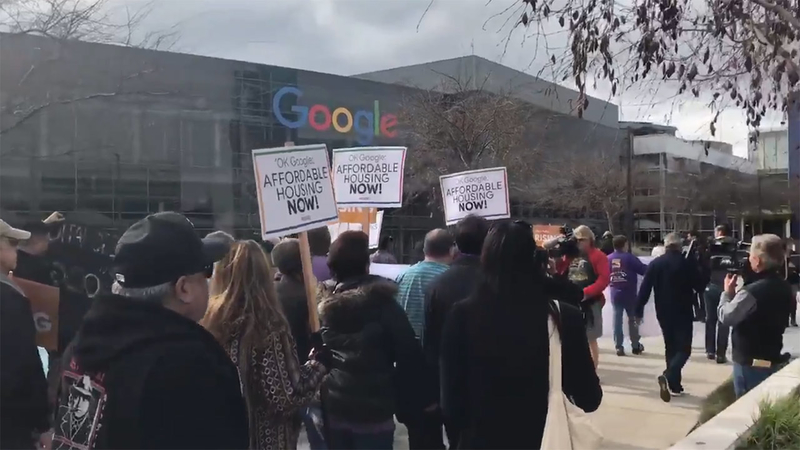 MOUNTAIN VIEW, Calif (KGO) -- A protest happened in front of Google headquarters in Mountain View. The group demanded the tech giant addresses concerns residents have over the proposed mega campus in San Jose.

The group Silicon Valley Rising wants Google to be a good neighbor. They are concerned the proposed mega campus in San Jose will lead to increased rents, evictions, and homelessness. The group has held three town hall meetings and activists say Google has not attended a single one. Google is currently in negotiations with the city of San Jose to buy public land so it can build a 6.8 million square foot campus near Diridon station, a major transit hub.

"We haven't had meaningful engagement from Google with the community. So if they're not going to come to us, we're going to go to them. So that's why we're here today to deliver a letter with our demands to request for them to engage with us and to let them to know we're not going away," said Maria Noel Fernandez, the campaign director for Silicon Valley Rising.

The group is demanding Google provide a community administered affordable housing fund, require 25 percent of residential units in the Google project be for low income tenants, ensure legal defense for San Jose tenants facing eviction, and support tenants' rights policies. Activists will be delivering a letter to this morning to Google's CEO Sundar Pichai outlining all this. We reached out to Google for comment, but did not receive a response.

Wednesday at 5 p.m., there was a protest at city hall to call on the San Jose City council to protect the city's diverse communities from displacement while they negotiate with Google.

Google has released the following statement: "The city-led community engagement phase for Google's proposed development is set to begin in the near future. We look forward to working closely with local officials and the community to create a shared vision for downtown San Jose that will benefit the city and its residents."

Protest at Google HQ. They’re delivering letter to CEO demanding he address concerns over proposed SJ megacampus. Residents say it will lead to ⬆️rents & evictions. They want Google to be a good neighbor pic.twitter.com/cD0AQnJx3P