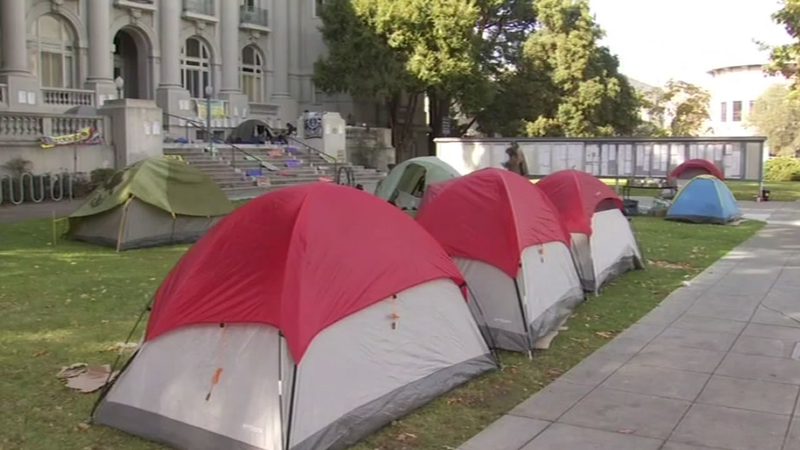 BERKELEY, Calif. (KGO) -- It is day two of a campout at the old city hall in Berkeley, where the city council is poised to crack down on the homeless, living on their streets.

Calling themselves a compassion city, Berkeley leaders say they are just trying to make things better for everyone. However, those that call themselves "freedom sleepers" say these new laws would only push the homeless farther into the shadows.
The demonstrators who have taken up residence at Berkeley's old city hall say a set of proposed ordinances, designed to control the homeless, ignore the people behind the problem.

Homeless advocate Dan McMullan said, "Make them look like animals, and in the mind of the voters, make people animals, instead of people, and people that need to be helped."

Among the items before the city council is making it a crime to park a shopping cart between the hours of 7 a.m. and 10 p.m. and a ban on taking up more than two square feet of space on the sidewalk.

Demonstrator Casey Hosier pointed out, "Well if you have a backpack or a bike even, it extends to your bike, everything you have. You have more than that, they give you a ticket."

Berkeley Mayor Tom Bates said, "It's not an effort criminalize people, it's an effort to try to make things more civil."

Bates supports the package of new ordinances, which also includes creating storage space, up to 100 bins for the homeless and other services.

"Berkeley's a very compassionate city and always has been and will continue to be. We think things like giving them showers and having an opportunity to place their goods is an important step forward," Bates said.