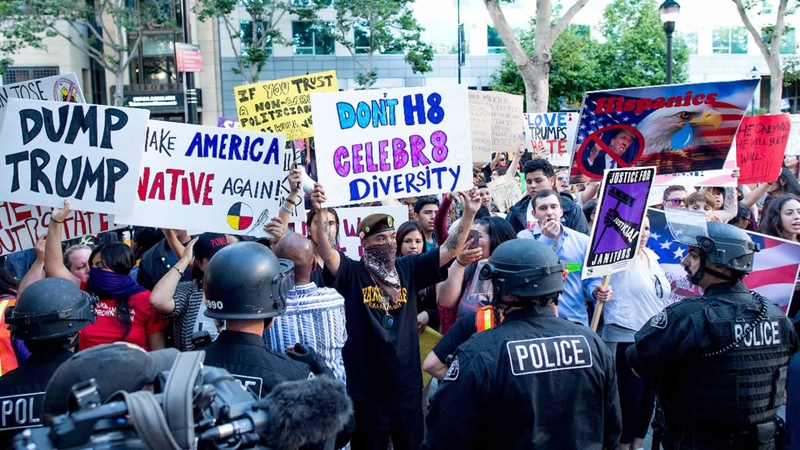 SJPD criticized for not stopping attacks outside Trump rally

SAN JOSE, Calif. (KGO) -- Eggs and fists were flying at the Donald Trump rally in the South Bay on Thursday, with the violent scene making national headlines.

San Jose police were criticized from not doing more to intervene during the violence.

When Trump supporters left the rally on Thursday night, many were attacked, harassed and even sucker punched - including women.

Great evening in San Jose other than the thugs. My supporters are far tougher if they want to be, but fortunately they are not hostile.

Andrew Zambetti was walking down the street with blood streaming off his head. "I was just walking right there and they came up behind me and socked me. There was like 20 of them," he said.

Another man said he went to police to get help for Zambetti but got no response. "I went over to the police to let them know he was being attacked and look how they responded. They were smug. This one got the smiling at me. They ignored me," the man said.

ABC News reporter Tom Llamas witnessed much of the same thing as the violence escalated. "Now the police were here the entire time, but they never seemed to intervene as people were getting beaten up. It seems like they were trying to hold the perimeter," he said.

Rally preparation. Tomorrow, we WILL protect the 1st Ammendment, our Community, and our Officers. #SJPDPRIDE pic.twitter.com/lLfi995rXc

San Jose Police Chief Eddie Garcia tweeted out the day before the rally, "Tomorrow, we will protect the First Amendment, our community, and our officers."

But after the rally, there was a harsh response to Garcia online. "Lousy job. Pathetic. You should hang your heads in shame. Women were attacked and your officers did nothing," Cheryl Rose tweeted.

@sjpdchief Lousy job. Pathetic. You should hang your heads in shame. Women were attacked and your officers did nothing. @SanJosePD #Fail

Another reply said, "Have always supported the police, but San Jose PD were a complete failure and disgrace. You sir should resign."

San Jose police released a statement saying, "While several physical assaults did occur, the police personnel on scene had the difficult task of weighing the need to immediately apprehend the suspect(s) against the possibility that police action involving the use of physical force under the circumstances would further incite the crowd and produce more violent behavior."

Mayor Sam Liccardo released a statement saying San Jose police officers performed admirably and professionally, but said there is absolutely no place for violence against people who are simply exercising their rights to participate in the political process.

Rally last night in San Jose was great. Tremendous love and enthusiasm in the hall. Big crowd. Outside, small group of thugs burned Am flag!

Police say one officer was assaulted Thursday night. There were no reports of any significant property damage. Four people were arrested.