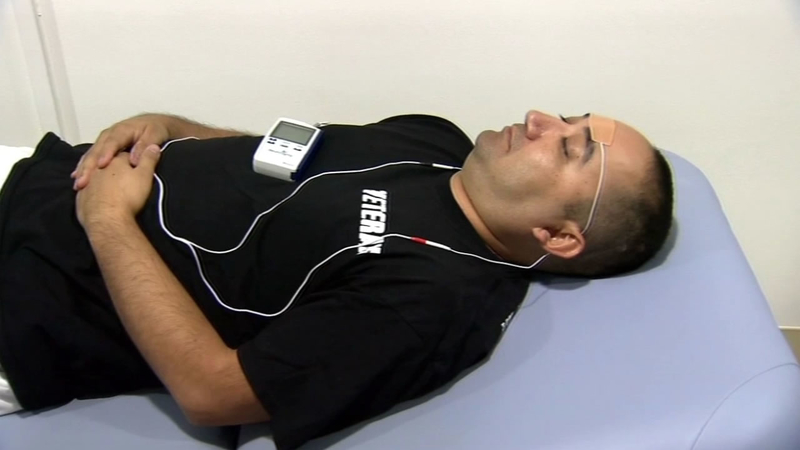 LOS ANGELES, Calif. (KGO) -- The horror of combat is something many veterans live with every day, but a new device may ease the strain of post-traumatic-stress-disorder.

A new study at the University of California Los Angeles (UCLA) is underway to see if administering mild electrical currents into the brain can reset its networks for those dealing with post-traumatic stress disorder.

On May 3, 2006, Army Sergeant Ron Ramirez was on night patrol in Iraq when a roadside bomb blew up under his truck.

"I just saw the bright light, all of a sudden I couldn't see. I couldn't hear," Ramirez said.

The machine gunner suffered a traumatic brain injury and a perforated ear-drum. While his body healed, invisible wounds continued to haunt him. Ramirez' violent outbursts scared his two daughters and everyone he was close to.

"I would yell. I'd throw things. I just, I didn't know, I couldn't see myself," Ramirez said.

Then he heard about a new research study from veterans with PTSD. Researchers at UCLA's Semel Institute for Neuroscience were studying how stimulating a nerve on the side of the face called the triageminal nerve might reset brainwaves.

Ramirez places an electrode on his forehead and sleeps with the device. Doctor Andrew Leuchter says the TNS therapy has been used to treat epilepsy and depression, but it holds great promise for treating chronic PTSD.

"When people go through a traumatic event, the brain in some ways gets to be rewired. What we're doing with TNS is we're sending in electrical signals that can help reset the functional brain networks and help people get over the symptoms of their illness," Leuchter said.

Doctors say what many people don't realize is the language of the brain is electricity and it doesn't take a lot. The current used in these devices is similar to a 9-volt battery.

Leuchter is working with the Veterans Administration to recruit more veterans who've served since 9/11. Ramirez says he's seen a huge difference after using this TMS therapy for two months. And for the first time he feels like he can win his family back.

"It gives me a sense of happiness," he said.