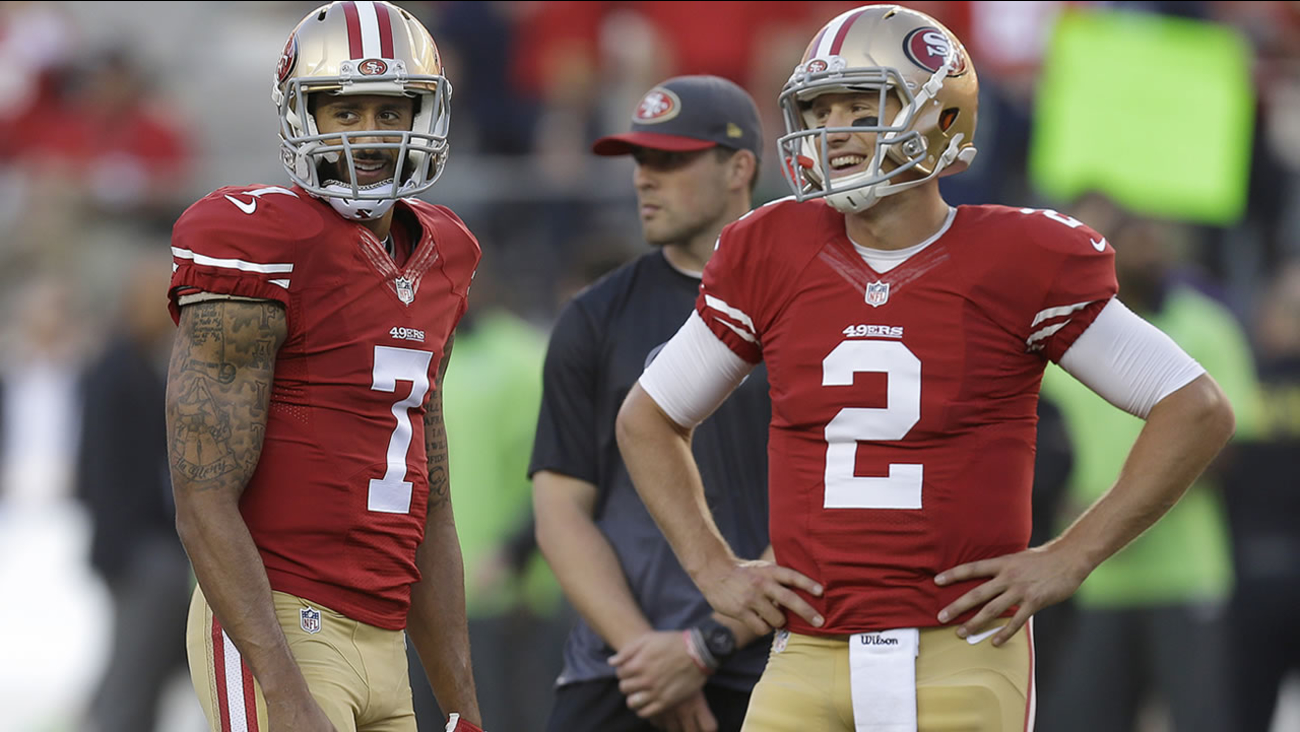 SANTA CLARA, Calif. (KGO) -- There has been a major shakeup for the San Francisco 49ers after star quarterback Colin Kaepernick is benched. ABC7 Sports anchor Mike Shumann take a look at what this means for the team and fans.

The move came at a bad time for the quarterback - today happens to be his 28th birthday.

However, his lackluster rise as a quarterback for the 49ers was only equaled by his stupendous fall from grace.

Kaepernick took over for Alex Smith in 2012 and led the team to Super Bowl XLVII where the team lost to the Baltimore Ravens. He then led the 49ers to two more NFC title games. But since head coach Jim Harbaugh left, Kaepernick's play has deteriorated.

The day after the team's sixth loss, the 49er store at Levi's Stadium says sales are down from $10,000 a day to $1,000 and they equate it to the teams play, namely Kaepernick. Fans are not surprised at the benching.

San Jose resident James Dunn says, "I'm glad he's getting benched. He wasn't doing anything, but I feel it's not only him."

Vacaville resident Mike Blankenship says, "Honestly, I think they're a little bit more upset with ownership in general. I just think that the team is in turmoil. They're going downhill real quick and I just don't see them coming out of it any time soon."

Local sports talk radio 95.7 The Game got an earful today. Talk radio hose Greg Papa said, "He just slowly began to lose his confidence and I personally - you know I was not a Harbaugh fan at the end -- and I blame him and his coaching staff, that for whatever reason, they were bit able to develop this guy. He just may have never been someone you could develop."

Bono, who replaced Steve Young in 1991 and went 5-0, understands the 49ers' move. Bono said, "If you ask Kaep right now, no, it feels awful. Unfortunately, I've been in that position too. He is struggling, the team is struggling, they need to make the change, everybody else needs to step it up. They've got way more issues than the quarterback. Let's face it."

I think it will be good for Kaepernick to sit back and watch and kind of see the big picture. I think we'll see him start again at some point because replacement quarterback Blaine Gabbert is not much of an upgrade, but 49ers had to take a look at Gabbert.

ABC7 News Sports director and anchor Larry Beil thinks Kaepernick is a convenient scapegoat and he deserves some responsibility, but the 49ers have drafted horribly over the past few years and you have the sudden retirements of guys like Anthony Davis, Patrick Willis and Chris Borland have really hurt. This looks like a team in need of a complete overhaul.

Fans we spoke with said the same thing, they think it's the front office; they're not blaming Kaepernick. Yeah, they think he needs to sit down for a game, but they see what's going on here and I think it all falls in General Manager Trent Baalke's lap, and I think he might be using Kaepernick as a scapegoat.

Gabbert takes over as the 49ers' quarterback; who knows how long that will last. He went to the University of Missouri. He was drafted with the tenth overall pick in 2011 by the Jacksonville Jaguars, who are also a terrible franchise. He was the scapegoat there. Gabbert was actually selected ahead of Kaepernick, who the 49ers took in the second round.

Gabbert played almost immediately for the Jaguars, but with little success, winning just five of his 27 starts. He was traded to the 49ers in 2014 and played in just one game for the team last year.