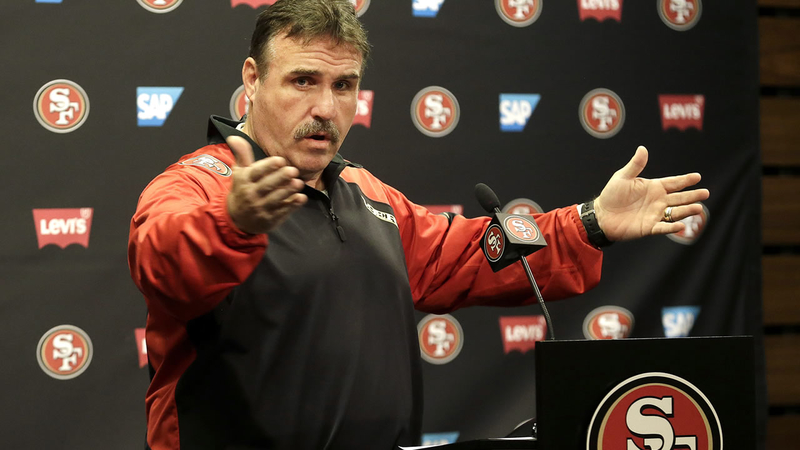 SANTA CLARA, Calif. (KGO) -- The San Francisco 49ers will have some new faces in important positions when they play the Atlanta Falcons on Sunday. Vernon Davis was traded and Colin Kaepernick was benched. Head Coach Jim Tomsula discussed the changes at a news conference Wednesday.

The 49ers will not look the same this Sunday. Two of the biggest names on the team were given some harsh news this week. Ddavis was traded to the Denver Broncos on Monday and Kaepernick was benched heading into Sunday's game.

It might not be the end of his NFL career, but analysts say this move is likely the end of Kaepernick's time in the Bay Area.

"I don't think he is broken completely, I think this is reparable," said Trent Dilfer. "Right now he had to be benched because Jim Tomsula can't stand up in front of the team and say he is going to evaluate every player and ignore how poorly the quarterback has played for the majority of this year."

Just because the quarterback of the NFL's lowest scoring offense will now hold a clipboard, don't expect things to get better with Blaine Gabbert.

The prediction system for the NFL projects the offense led by Gabbert will score five less points a game and cost the 49ers one more win on the season. They now have a 30 percent chance of having the worst record in the NFL.

And as the faces change on the field, the face and name of Vernon Davis remains in the community. He's the owner and frequent customer at his Jamba Juice just a mile and a half away from Levi's Stadium.

TE @VernonDavis85 traded to #Broncos but his @JambaJuice store near Levis Stadium still has him in #49ers uniform. pic.twitter.com/gTF9mZ2xXb

Customers and workers told ABC7 News they were sad he was traded, but the fans would keep it a Niners store.

Going to Levi's Stadium on Sunday? Tickets for #49ers vs #Falcons available for less than $50 each on StubHub. pic.twitter.com/w5eOVkoQp5

If you're interested in going to Levi's Stadium this Sunday for the 49ers-Falcons game, there is some good news -- tickets are cheap. ABC7 News found several priced under $50.

3 surgeries yesterday for #49ers including Reggie Bush according to Jim Tomsula.

"We said goodbye to a good Niner. We wish him the best. Vernon Davis." Jim Tomsula

Jim Tomsula on long term view on QB position. "It's this week. Going into Atlanta #BlaineGabbert will be my quarterback."

Jim Tomsula on what he wants for #ColinKaepernick. "Just step back. Take a look at things. That's what I want."

Jim Tomsula- "Colin will be a tremendous teammate."