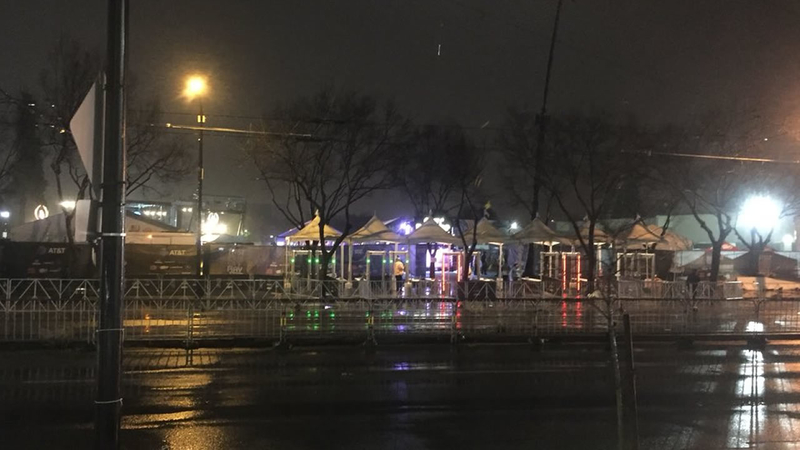 One was the the Imagine Dragons and Lil Wayne rehearsal on Treasure Island. The two are teaming up for the College Football Playoff Halftime Performance Monday night.

People who had tickets to the rehearsal got an alert Sunday afternoon saying the rehearsal was canceled, "due to high winds and inclement weather."

BREAKING: #ATTPlayoffPlaylist featuring @regrettesband, @elliegoulding and @OneRepublic has been cancelled. Organizers and local authorities concerned for the safety of spectators and performers in light of high winds and standing water. The show will not be rescheduled.

The Regrettes, Ellie Goulding and One Republic were scheduled to perform.

ABC7 News spoke with others who traveled a really long distance. Clemson resident and fan, Christman Short said she initially had plans to spend the day in San Francisco, but the weather interfered.

The free concert was her Plan B.

"I've always heard that it was beautiful here. That it was gorgeous, that the weather's perfect," Short said about the storm. "But it doesn't surprise me. I did New York in New Year's this past year and it poured. Apparently that was the first time that it had ever done that. So, I'm starting to think it's following me."

Short hopes the misfortune doesn't follow her into the championship game.

Others tell ABC7 News the storm was not enough to dampen spirits across San Jose. The city has been transformed into College Football Playoff central.