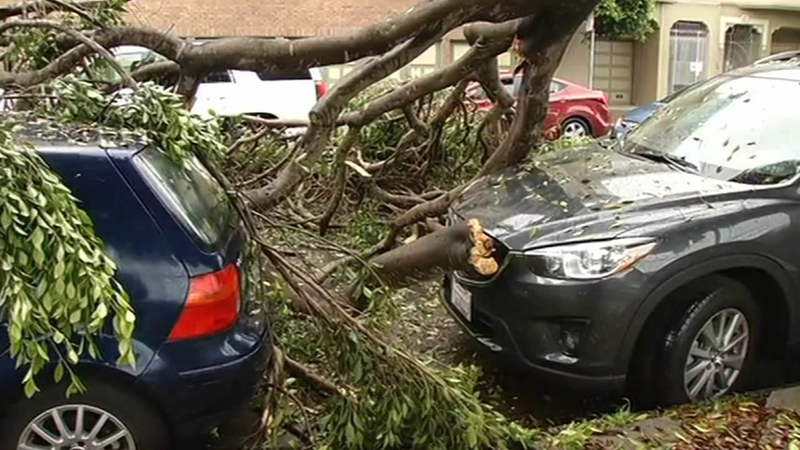 Officials said inclement weather could last through the early part of this week.

Travelers should use caution due to moderate to heavy rain in some areas.

The fast moving storm toppled trees and created some dangerous driving conditions all across the Bay Area.

The Presidio took a big hit during the storm and now a big repair job is underway.

Infantry Terrace in the Presidio is closed to traffic Sunday night while crews replace power poles, which snapped off during the storm.

Many people were left without power.

Beckett Fishburne told ABC7 News he heard a big crash when a huge cypress tree in the Presidio toppled in the storm, taking a power pole down with it.

"Our friend was leaving and we walked out and there was a big crash and the power line came down and then the live power line fell over there," Lindy Fishburne said.

Several blocks away, the domino effect from that tree took down other lines too.

Fallen live wires in the road forced the closure of Infantry Terrace and Moraga Avenue, leaving leaving many in the dark.

A ficus tree snapped and fell right on top of a taxi cab on Oak Street, busting its windshield, but the driver wasn't hurt.

Several parked cars took some damage from the tree and traffic was snarled for hours.

Crews had a very big clean up job on their hands. "One of the biggest challenges of course is to get trees cleared from traffic lanes so we can keep traffic moving," San Francisco Public Works Department spokesperson Rachel Gordon said.

In the North Bay, a big-rig truck lost control and slammed into a power pole on southbound Highway 116 near Petaluma. The CHP says wet roads and bald tires on the truck were factors in the crash and luckily the driver wasn't seriously hurt.

In the East Bay, wet roads caused a car crash on Highway 92 in Hayward.

Heavy rain brought flooding to Highway 580 in Dublin and one car stalled on the flooded on ramp.

And in San Mateo, the rain made for some challenging driving on wet streets.

Back in the presidio, some residents are waiting for their power to come back on after the big storm.

"I think it's going to be a wet afternoon and a little dark," Fishburne said.

The repair could take 24 hours.

Motorists are advised to slow down and use caution while on wet roadways.

Officials said minor urban flooding may be possible in some areas, especially on Tuesday.

Strong winds reaching 50 mph could hit coastal areas during the next few days.