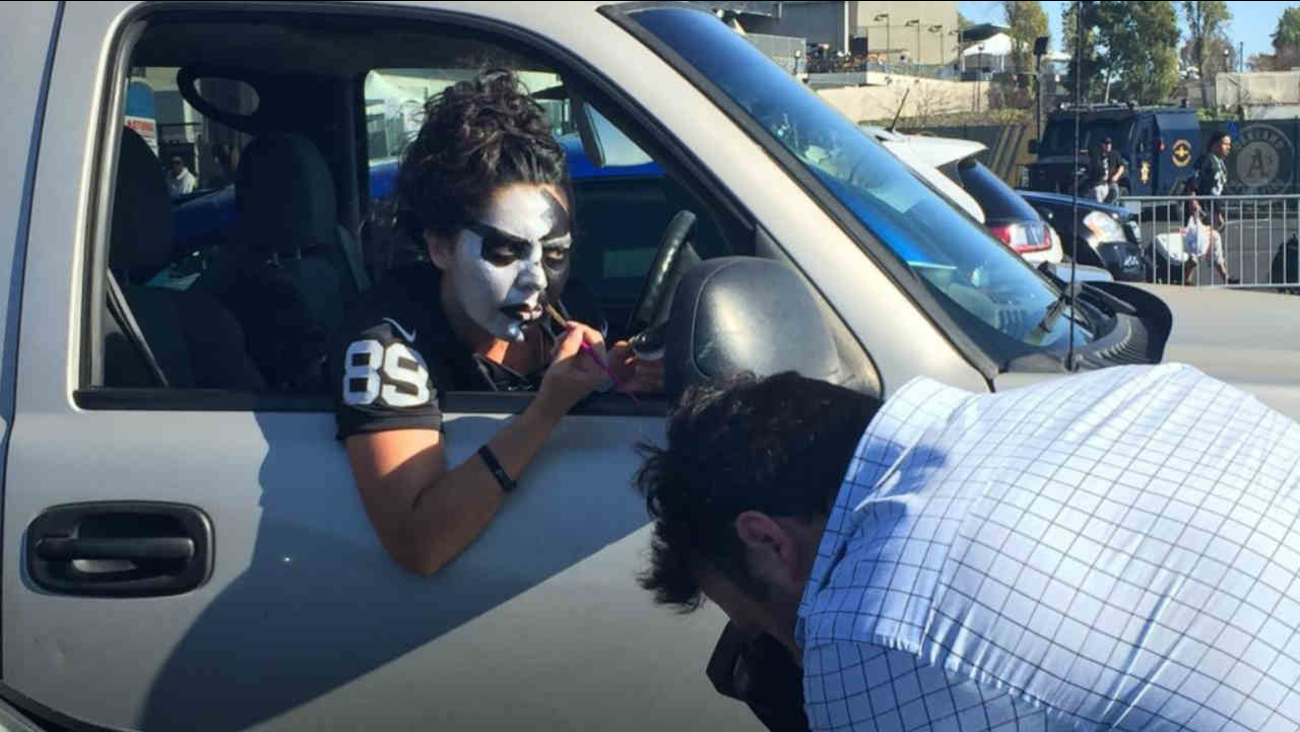 Raiders fans get ready for the season opener at the Oakland Coliseum in Oakland, Calif. on Monday, September 10, 2018. (KGO-TV)

OAKLAND, Calif. (KGO) -- The Raiders mascot is a pirate, and it seems fitting for the Raider Nation as the fans face what may be their last season opener at the Oakland-Alameda County Coliseum.

Many say the team is more important than location and they will follow to Las Vegas.

If the Autumn Wind is a Raider these fans will sail with the eastward breeze.

Warning... untimely tweet due to the poor cell coverage while tailgating with the #RaiderNation 🏈, but fun times nonetheless. War paint on 👩‍🎤, grill hot 🌭, and “hydration” 🍻taken care of at the @OAColiseum ahead of the season opener. #abc7now pic.twitter.com/TAdmkfU1IK

"I've always been a raiders fan since day one. So hey, if they moving it's time to invest a little real estate out in Vegas," said Jason T. McNeil, Raiders fan.

They'll miss this port though.

"We've been here for at least 25 years maybe more since they came back," said Jay Youngkamp about tailgating at the coliseum.

Rumors of a lawsuit against the team loom over the season opener. The City of Oakland may sue the Raiders for leaving town as $90 million in bonds are still owed on the coliseum renovations.

"When haven't the Raiders been sued? How many times have they won in court, almost always," said "Grim Raider" a long time Raiders fan in full costume.

“Nothing to report here. It’s all bad,” #Raiders fan tells me following season opener loss to the #LARams. Sports fans are so pure sometimes. 🙄

"As much as it hurts me that they're leaving Oakland that it's right in my backyard. I already went ahead and purchased Vegas tickets. It tugged at my heart, but I love my team," said Audrey Diaz, Raiders fan.

Visiting Rams fans know the feeling of a team that drifts from city to city.

"I was barely out of high school when they left and I was sad and then it was a blessing when they came back," said Luis Garcia, LA Rams fan.

"We all come back like lemmings. You know we're all here and we have a great time and we're undefeated in the parking lot," said Youngkamp.

Diaz said her money did not go as far for season tickets in Vegas. When asked how they compared to her tickets in Oakland. She said, "They're outrageous!"