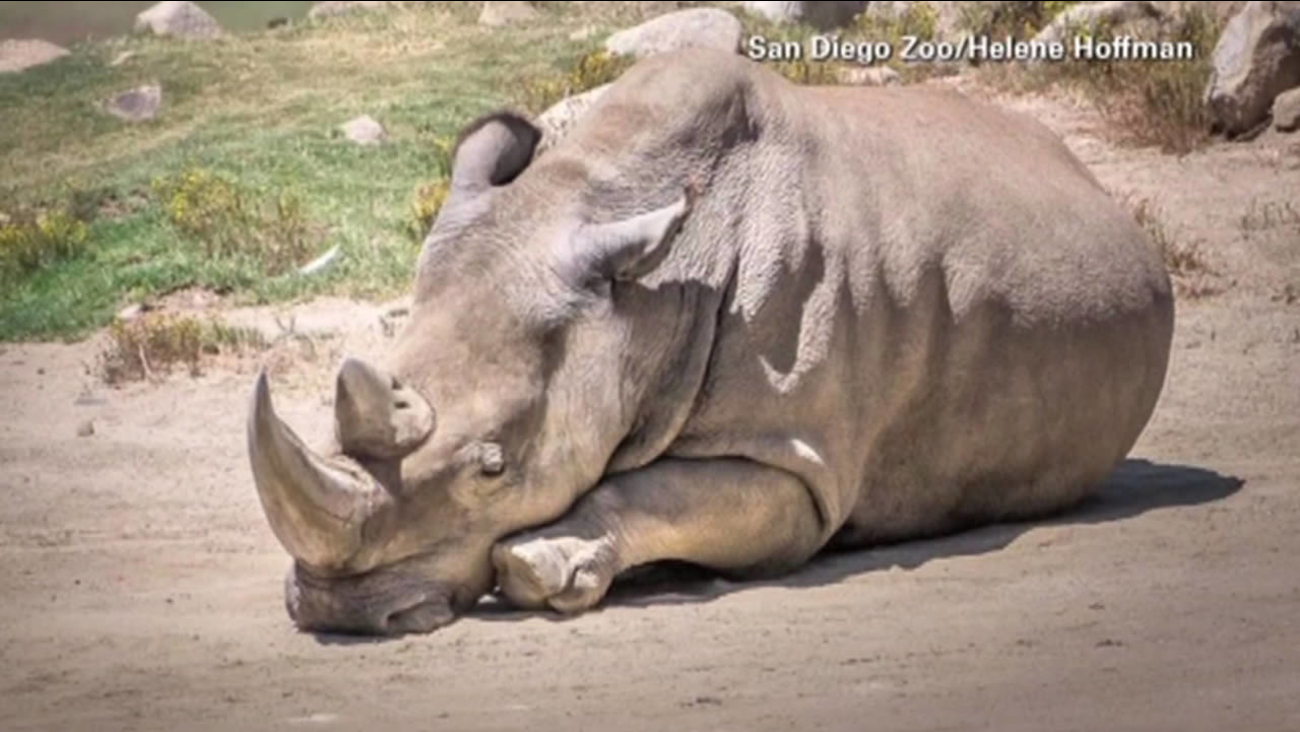 Officials at the San Diego Zoo Safari Park have announced the death of a rare white rhinoceros named Angalifu.

SAN DIEGO -- A northern white rhinoceros that was only one of six left in the world died Sunday at the San Diego Zoo Safari Park, zoo officials said.

Angalifu, who was about 44 years old, apparently died of old age.

"Angalifu's death is a tremendous loss to all of us," safari park curator Randy Rieches said in a statement. "Not only because he was well beloved here at the park but also because his death brings this wonderful species one step closer to extinction."

His death leaves only one northern white rhino at the San Diego zoo - a female named Nola - one at a zoo in the Czech Republic and three in a preserve in Kenya.

Rhino horns are valued as dagger handles and are mistakenly seen as an aphrodisiac. As a result, poaching has pushed the critically endangered rhinos to the brink of extinction.

Just last week, preservationists at the Old Pejeta animal sanctuary in Kenya conceded that their one male and two female northern white rhinos will not reproduce naturally. The animals were flown from the Czech zoo to the Kenyan conservancy in December 2009 in hopes that the natural environment could be easier for them to breed there than in captivity.

Efforts will now be made to keep the species alive through in vitro fertilization. That experiment could take place with a southern white rhino surrogate mother. Southern white rhinos almost went extinct at the end of the 19th century, plunging down to only 20 at one point. Decades of conservation efforts gradually brought them back to life.
Related topics:
societysan diegoanimals in perilwild animalssouthern californiaanimalsan diego zoo
Copyright © 2022 by The Associated Press. All Rights Reserved.
TOP STORIES
2 dead after SF officers respond to assault, fire weapons, police say
ABC7's new 24/7 live stream offers local news, weather
East Palo Alto residents demand action after deadly shooting
Biden starts Asia trip with global issues and tech on agenda
2 Cal students make history as 1st nonspeaking autistic graduates
Owner of popular Oakland restaurant dies in shooting
Kidnapped CA teen found in NY thanks to quick-thinking detective
Show More
Oakland is target of most Bay Area freeway shootings, data shows
2 killed after shooting, crash on EB I-580 in Oakland, CHP says
Expert weighs in on when you can buy a car amid chip shortage
Coastal communities upgrade water systems in face of drought
What is monkeypox? What to know after US confirms 1st 2022 case
More TOP STORIES News