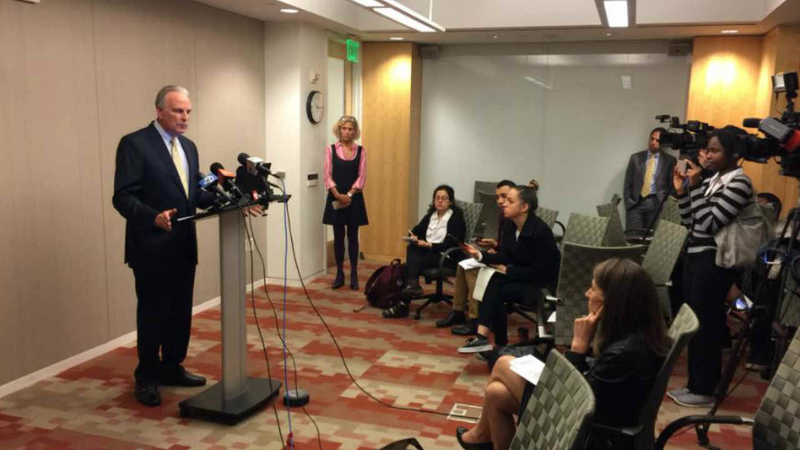 SAN FRANCISCO (KGO) -- At the former Hunter's Point Naval Shipyard, this was another day stuck between the past, the future, and nagging questions about what may or may not have been a toxic clean-up there.

Was it fraud, flawed, or none of the above?

"All I know is the work we did was proper and followed all the protocols," said William Brownlie, chief engineer of Tetra Tech, which received hundreds of millions of federal superfund dollars for cleaning a mess that included radioactive waste from ships involved in nuclear testing, and also from a lab on the base. With growing questions about the quality of that clean-up, Brownlie met with reporters this morning in an attorney's office. He announced that the company will pay for a soils test by an independent contractor, and on the Navy's terms.

"It is unfortunate that false claims may delay the redevelopment process," said Brownlie. "We know we did it properly."

Tetra Tech has faced increasing scrutiny in recent months. Last January, the Navy issued a report questioning at least half the soil samples Tetra Tech collected. Earlier this month, the EPA released a letter saying that on two parcels, 97 percent of the testing data was flawed.

Those reports have unsettled residents like Jason Fried, who bought one of the first condos to rise above the former shipyard. He knew about the radioactive waste but considered it a non-factor. "The Navy said fine, they had cleaned everything up. I am a little disappointed and upset."

"There is a public health threat. It is an environmental threat. They need to deal with it," said Bradley Angel, who speaks for Green Action. As taxpayers, we should not have to pick up the bill for what the US Navy, the EPA, and state of California agree looks like fraud on a massive and unprecedented scale.

Nor did the announcement placate San Francisco Supervisor Malia Cohen, who plans a hearing on this with the Land Use and Transportation Committee. "No other time have we heard from Tetra Tech. Think about that. After years of allegations. I think the bigger story is about environmental injustices that have gone on for a very long time."

The company said it would pay for retesting at the site by an independent third-party contractor.