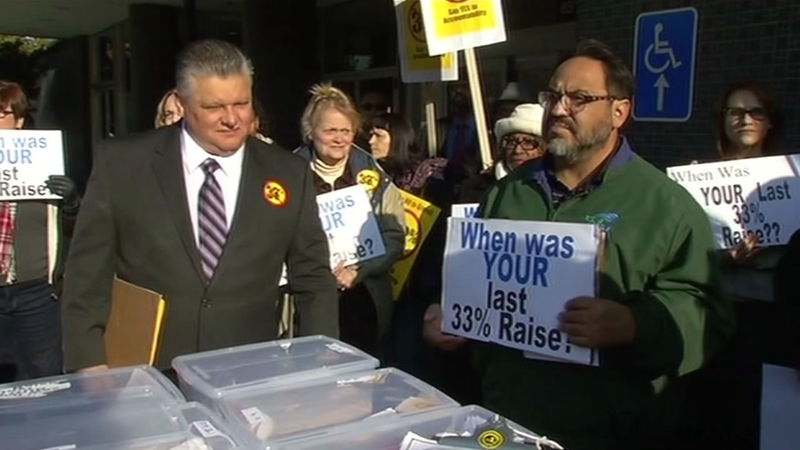 CONTRA COSTA COUNTY, Calif. (KGO) -- Reacting to outrage among taxpayers and their own unions, Contra Costa County supervisors have decided to revoke their controversial 33 percent pay increase. But the issue is far from dead. In fact, both sides are claiming the other side crossed the line by lobbing personal attacks and, some say, threats.

"We intend to try to get beyond the issues that were raised here," said Supervisor John Gioia.

That may not be so easy for supervisors, who began the process of rescinding their own 33 percent pay increase. It was a controversial increase that prompted a petition drive led by employee unions that gathered nearly 40,000 signatures.

"We all are committed to listening," Gioia said. "And I think that's why we have this on the agenda today."

In November, supervisors voted 4 to 1 to adjust their own annual pay to be more commensurate with other Bay Area counties, from $97,000 to $129,000 per year.

"While today's reconsideration of that ill-conceived ordinance is certainly a good step forward, it never should have come to this," said Peter Nguyen, general manager of Local 1. "If you recall, over the three meetings in which this ordinance was originally discussed, public opposition was unanimous and passionate."

"It was not a raise as has been called, but a salary adjustment," said one supervisor at Tuesday's meeting.

While the pay increase is on the way to being revoked, it appears the bad feeling between the board and its labor unions is just beginning.

At issue, recent statements made by Supervisor Karen Mitchoff who was clearly upset with the unions' role in the petition drive. Union leaders tell ABC7 News that they found Mitchoff's statements threatening.

"As I've told them many times, you may have won the battle. But I'm not sure you've won the war," said Mitchoff in an interview with ABC7 News on Jan. 2.

Contacted by ABC7 News, UC Berkeley labor expert Harley Shaiken told us: "The reality is, to use opposition to that raise as a threat to public workers is wildly inappropriate and damaging,"

"I'm actually extremely disappointed in the defiance that several members of this board of supervisors demonstrated in the face of what was a clear and unambiguous message from the voters," said Nguyen.