KGO
1 / 8
LEFT: The iconic image of Nixon waving after resigning the presidency. RIGHT: The Twitter logo.
AP
August 8th is the 40th anniversary of President Richard Nixon's resignation. But one Twitter account shows that the former President is still up to no good.

The controversial President has resurged many times in popular culture in the past decades, but this Twitter incarnation of Nixon's may just be the most accurate post-death portrayal yet. The tweets come from @dick_nixon, an account with over 14,000 tweets and 7,500 followers. The language is so spot on that it's difficult to imagine anyone else but the President or his Press Secretary tweeting. 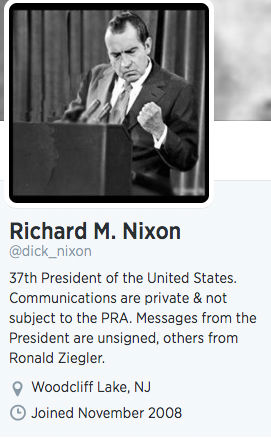 Nixon goes on to tweet about any sort of topic (Hilary Clinton and the Kennedy family are common talking points), while also fielding questions from his social media constituents. Just the tone, idioms and syntax of the tweets are so quintessentially Nixon that it's hard to decipher if the account is a joke or some social media voodoo from the grave.

The Nixon account comments on Hillary Clinton and Bob Woodward. 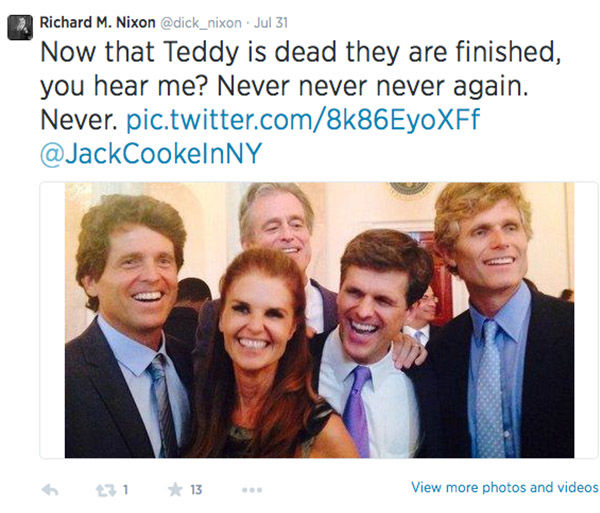 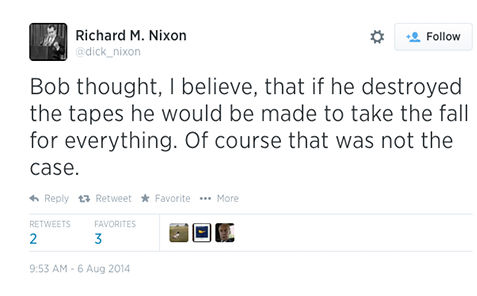 The Nixon account ponders on how the President handled Watergate.

Unfortunately there is a real person behind the account besides Nixon. 33-year-old playwright and New York resident Justin Sherin is responsible for the digital likeness of 37th President. Sherin is an amateur Nixon historian of sorts who became fascinated with the President's odd speech patterns and behavior, starting his own Nixon-esque tweets a few years ago. Hopefully Sherin doesn't resign his post as one of the best political parody accounts on the web. The 40th anniversary of President Nixon's resignation is tomorrow, August 8th.