Puppy adopted after being placed in cereal box, dropped off at SoCal animal shelter 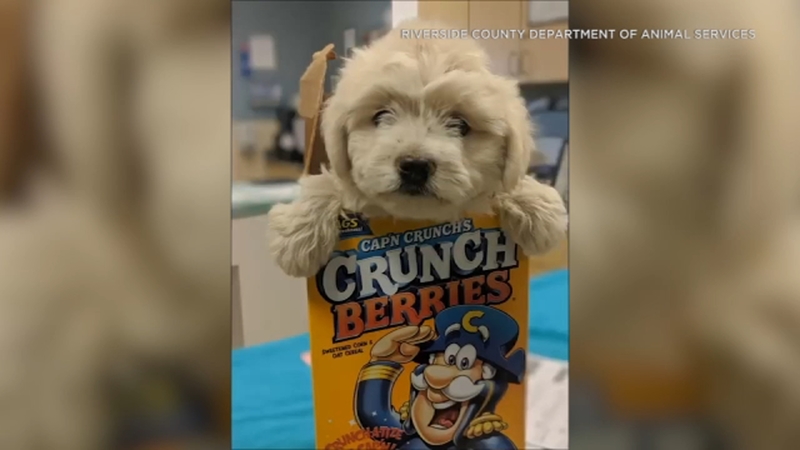 RIVERSIDE COUNTY, Calif. -- A tiny pooch that was nestled inside a cereal box when she was dropped off at a Riverside County Department of Animal Services shelter was adopted by a family who recently lost their own dog.

The shelter said Tuesday that the 9-week-old Maltese-Yorkie mix was found inside a Cap'n Crunch's Crunch Berries box.

On Saturday, a lottery was held for the pup, now named Razz Berry, at the Western Riverside County/City Animal Shelter in Jurupa Valley. The family who won said they heard about Razz Berry's story on the same day their 12-year-old Puggle, Ginger, died.

"This is going to sound ridiculous, but we always name our animals after seasonings. So we had Ginger, we have another dog, it's a Maltese-Yorkie mix, and that dog's name is Pepper. So she also is from the '80s music era and wanted Salt N' Pepa, so the other dog's black, she's been looking for a white Maltese. It just all happened, I don't know how it happened," Razz Berry's new owner said.

The family added they plan to keep the name Razz Berry.

The pup's new owners will pick her up next week after her spay surgery.