US: Russia amassed enough forces to invade Ukraine's cities; Moscow insists they will not start war 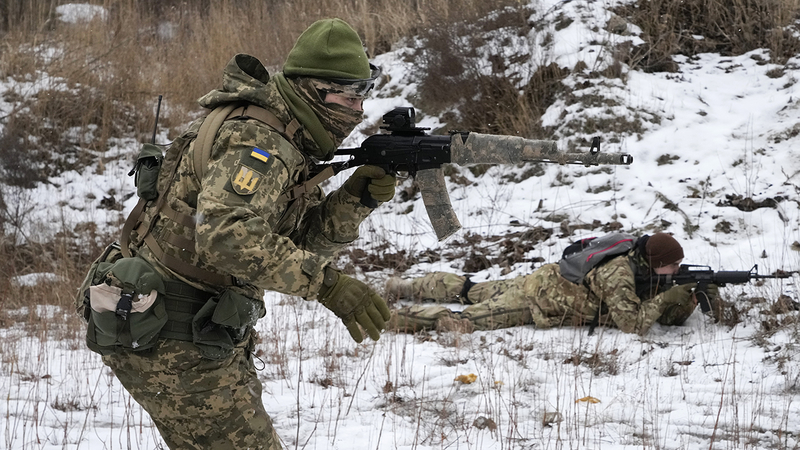 Both leaders urged Moscow to seek a peaceful resolution to the crisis with Ukraine and reassured NATO allies that the U.S. was ready to help reinforce NATO nations bordering Ukraine.

Austin told reporters that Russian military forces have "progressed at a consistent and steady pace" for months as the Kremlin has deployed forces to Crimea and along Ukraine's border, including in Belarus.

"We don't believe that President Putin has made a final decision to use these forces against Ukraine. He clearly now has that capability, and there are multiple options available to him," Austin said. "Including the seizure of cities and significant territories" or "provocative political acts like the recognition of breakaway territories."

MORE: Why does Russia want Ukraine? What to know as US, NATO fear Moscow is planning for war
EMBED More News Videos

Asked if this threat feels different from years past, Miley said, "This is larger than anything in scale and scope in the massing of forces than anything we've seen in recent memory."

Milley added that given the array of forces and the amount of firepower the Russian military has amassed a Russian invasion would be catastrophic for Ukraine, causing "a significant amount of casualties."

"You can imagine what that might look like in dense urban areas, along roads and so on and so forth. It would be horrific. It would be terrible," he said. "And it's not necessary, and we think a diplomatic outcome is the way to go here."
With 8,500 U.S. troops in the U.S. on "heightened alert" this week to head to the region, Austin said, "If NATO activates its Response Force, these troops will be ready to go."

"Putting our forces on a shorter string enables us to get there in a shorter period of time," said Austin. He explained that the decision to announce the heightened alert status reflected the focus "on making sure we're ready to live up to our commitment to NATO.

"Conflict is not inevitable. There is still time and space for diplomacy," Austin continued. "The United States, in lockstep with our allies and partners, has offered Russia a path away from crisis and toward greater security in the Department of Defense will continue to support those diplomatic efforts."

The U.S. acting ambassador to Ukraine, Kristina Kvien, told ABC News that Ukraine is ready in the event of a Russian invasion.

He also the U.S. remains committed to sending financial security assistance to Ukraine and holding a united front with NATO allies.

"As we've made clear, in addition to the significant economic and diplomatic costs that Russia will incur, a move on Ukraine will accomplish the very thing Russia says it does not want a NATO Alliance strengthened and resolved on its western flank," Austin said. "The United States will contribute to NATO's response forces, and we will coordinate with our NATO allies, and we will make sure that they have the capabilities that they need to defend themselves."

Asked what it would take for him to trust Russian President Vladimir Putin, Austin said it's not about trusting Putin but "about our allies trusting us -- and so that's really what we're focused on."

The White House said President Joe Biden had a call with Ukraine President Volodymyr Zelenskyy on Thursday, to "reaffirm our support for Ukraine's sovereignty and territorial integrity," after the U.S. hand-delivered its diplomatic response to Russia's security demands and refused to agree to its central request that Ukraine never be allowed into NATO.

I spoke with Ukrainian President Zelenskyy to discuss our coordinated diplomatic efforts and reaffirm our support for Ukraine’s sovereignty and territorial integrity. We will respond decisively — along with our Allies and partners — if Russia further invades Ukraine. pic.twitter.com/hRaUIxyxCd

At a press briefing Friday morning from Moscow, Ambassodor John Sullivan, who delivered that U.S. response Thursday, reiterated that any further incursion to Ukraine would be met with massive economic sanctions.

Russia's Foreign Minister Sergei Lavrov, in a press conference with Russian media on Friday, countered that the Kremlin will take retaliatory measures unless a guaranteed security agreement is reached with the West.

"If our attempt at reaching an agreement on mutually acceptable principles of the provision of European security fails, we will resort to retaliatory measures," Lavrov said.

Later on Friday, French President Emmanuel Macron was scheduled to speak directly with Putin as world leaders engage in finding a diplomatic solution.

While White House press secretary Jen Psaki repeated on Thursday the Biden administration's belief that an invasion of Ukraine could "come at any time" as Russian troops continue military exercises in a show of force, officials in Ukraine have urged their people not to panic.

JUST IN: "We are grateful for the support," Ukrainian Pres. Zelenskyy tells @IanPannell.

"But I can't be like other politicians who are grateful to the United States just for being United States...We want to be partners and true friends." https://t.co/EUf86T6Mra pic.twitter.com/GrMxtSM2nz