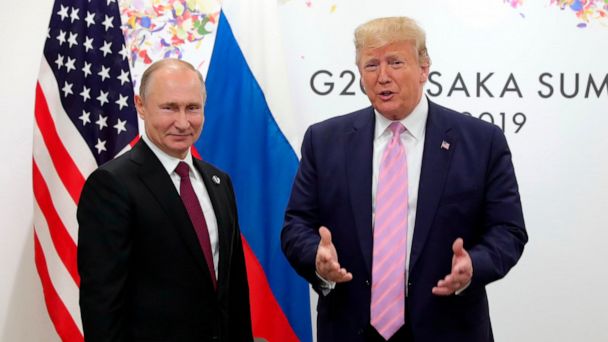 Three of America's top adversaries are actively meddling in U.S. presidential politics ahead of the November election, including efforts by Russia to advance President Donald Trump's reelection efforts, according to a public statement issued Friday by the U.S. intelligence community.

"We assess that Russia is using a range of measures to primarily denigrate former Vice President Biden and what it sees as an anti-Russia 'establishment,'" the statement said, adding that, "Some Kremlin-linked actors are also seeking to boost President Trump's candidacy on social media and Russian television."

In December, as the House impeachment inquiry against Trump was underway, the president's personal attorney, Rudy Giuliani, met with Derkach in Ukraine for a controversial film Giuliani was completing about Biden and his work in Ukraine as vice president.

Derkach has claimed that he provided derogatory information about Biden to lawmakers on Capitol Hill, where Republicans are still pressing forward with at least one investigation into whether Biden's policies toward Ukraine were influenced by his son Hunter Biden, who served on the board of the Ukrainian energy company Burisma while Biden was still vice president.

Biden has vehemently denied being influenced in any way, and several U.S. officials have -- under oath -- publicly described the allegations against Biden as not credible.

Russia's latest efforts are "consistent with Moscow's public criticism of [Biden] when he was Vice President for his role in the Obama Administration's policies on Ukraine and its support for the anti-Putin opposition inside Russia," said Friday's statement, which was issued by Trump appointee William Evanina, director of the United States National Counterintelligence and Security Center.

It was just over two weeks ago that Biden said he was putting the Kremlin "on notice" over its election interference.


"If elected president, I will treat foreign interference in our election as an adversarial act that significantly affects the relationship between the United States and the interfering nation's government," Biden wrote as part of a lengthy statement.

Evanina's statement also offered a new government assessment of efforts by China and Iran to influence the upcoming presidential election.

"We assess that China prefers that President Trump -- whom Beijing sees as unpredictable -- does not win reelection," the statement said. "China has been expanding its influence efforts ahead of November 2020 to shape the policy environment in the United States, pressure political figures it views as opposed to China's interests, and deflect and counter criticism of China."

On Iran, Evanina's statement said the regime there is working against "democratic institutions" in general, but also looking to "undermine" Trump and "to divide the country in advance of the 2020 elections."

"Tehran's motivation to conduct such activities is, in part, driven by a perception that President Trump's reelection would result in a continuation of U.S. pressure on Iran in an effort to foment regime change," the statement concluded, predicting that Iran's influence efforts "probably will focus on on-line influence, such as spreading disinformation on social media and recirculating anti-U.S. content."

As Election Day draws near, "foreign states will continue to use covert and overt influence measures in their attempts to sway U.S. voters' preferences and perspectives, shift U.S. policies, increase discord in the United States, and undermine the American people's confidence in our democratic process," Evanina said.


After Evanina issued his statement, the Department of Homeland Security's top cyber official, Cybersecurity and Infrastructure Security Agency Director Christopher Krebs, declared that such "transparency" and "awareness" are some of "the best tools our election officials and the American people have to help defend against election interference."

In their own statement, Senate Intelligence Committee Chairman Marco Rubio, R-Fla., and the top Democrat on the committee, Sen. Mark Warner, D-Va., thanked Evanina for today's release of information, and they encouraged "political leaders on all sides to refrain from weaponizing intelligence matters for political gain, as this only furthers the divisive aims of our adversaries."

"Evanina's statement highlights some of the serious and ongoing threats to our election from China, Russia, and Iran," Rubio and Warner wrote. "Everyone -- from the voting public, local officials, and members of Congress -- needs to be aware of these threats. And all of us should endeavor to prevent outside actors from being able to interfere in our elections, influence our politics, and undermine confidence in our democratic institutions."