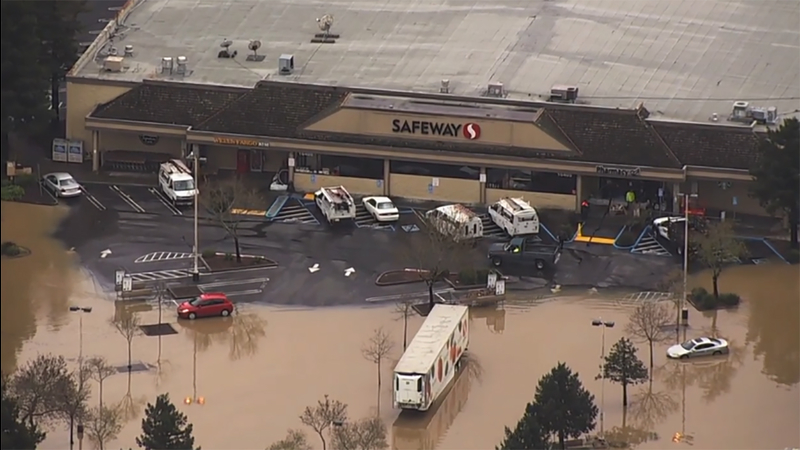 SONOMA COUNTY, Calif. (KGO) -- The rising Russian River flooded River Road and nearby communities this morning, blocking people from their homes and jobs and causing a wine country hotel to evacuate.

The river isn't expected to crest until tonight, but it has already spilled its banks and is causing a number of problems.

"It is incredibly flooded. It is really nuts. You see just the rooftops popping over on the side of the road," said Joe Pease, a county employee who drove River Road to deliver sandbags to firefighters but could only make it so far.

Homes are underwater and residents are escaping to higher land as the rising Russian River flooded Guerneville during a massive storm.

"It got to the point where it was getting too deep. Luckily the fire department came at that moment and delivered the package," said Pease.

Forestville resident Zak Wood was hoping to make it to work at Korbel. But at 7 a.m. River Road was closed at Mirabel Road, 7 and a half miles from Guerneville.

"I was down here at 6 a.m. and it was a foot and half lower maybe if I had gone then I would've gotten through," said Wood. "I have lived here in this area for the last 10 years and this is the highest I have ever seen it."

Members of the National Guard carrying kayaks and firefighters with boats and jet skis were allowed past the checkpoint. But everyone else was turned away. Including residents who did not expect the water to impact their neighborhoods.

National Guard headed in to Guerneville with kayaks as Russian River continues to rise. pic.twitter.com/RADybuXDQ2

"I left at 7 a.m. It was fine! I heard the river was cresting so I thought I'd better get home and it is obviously too late," said Cindy Garcia at 9 a.m. She had to turn around at The Farmhouse Inn. She said she was surprised the water reached so far.

That hotel also had problems. The driveway flooded and guests could not get out. One woman from North Carolina tried but her car got stuck in the water.

"We made a decision to take the rental car through the waist-high water and got two-thirds of the way and then the car stalled. I encourage anyone watching not to try and go through water more than a foot high because you never know," said Nina Sheehan of North Carolina.

A tow truck pulled her car out of the water. Guests who were still stuck on the other side of the water had to walk up a hill around the property to get out. Employees carried their suitcases through the water out to the street.

Authorities evacuated Guerneville yesterday. There is now no way in or out of the city except by watercraft. The river is expected to crest tonight at its highest level since 1997.

There will be shelters located at:

Officials say there will be a free shuttle running from the Guerneville Veterans War Memorial at 16320 Church St, Guerneville, CA 95446 starting at 3:00 PM on February 26, 2019.

More of the deep water as seen from a row boat in #MonteRio on #RussianRiver #abc7now pic.twitter.com/LNdqldkFGW

A Monte Rio landmark, the movie theater, now underwater. It has happened before. #abc7now #SonomaCounty pic.twitter.com/HEFEivkwUu

Here is how fast the #RussianRiver is flowing beneath the bridge in Monte Rio. ⁦@sonomasheriff⁩ is worried about debris damaging this bridge. And the water keeps rising. #abc7now #SonomaCounty pic.twitter.com/biTZGvSgJQ