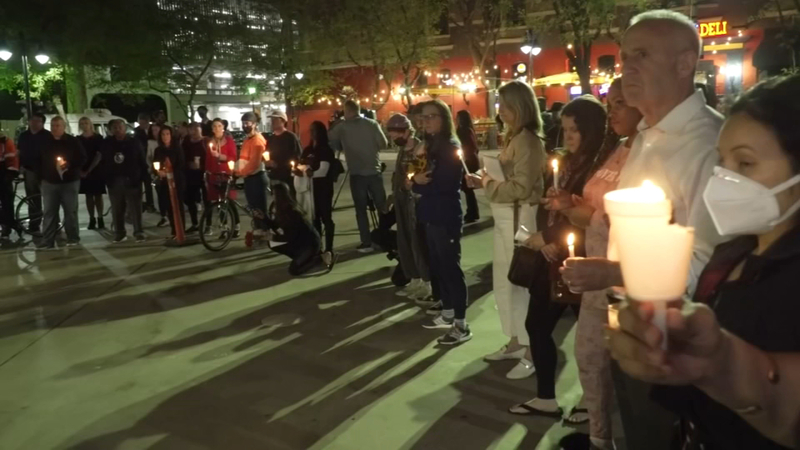 SACRAMENTO, Calif. (KGO) -- Candles lit up a dark night just 24 hours after six people were shot and killed in Sacramento's downtown area. In the crowd families consoled each other.

Five weeks ago, this community mourned the lives of four people killed at a church. Now, they're back mourning three men and three women killed just minutes after a fight broke out outside of several nightclubs and bars at 2 a.m. Sunday.

"This is the second mass shooting wave had in Sacramento. What are we gonna do about that? Our voices cannot be silence. Your public officials are here to hear you," said Berry Accius, Community activist.

Sergio Harris, 38, a father of three, was the first victim to be identified. His cousin 29 year old, DeVazia Turner was also killed.

"My cousins was gunned down," said Jackie Henderson, Sergio Harris's Cousin and added, "He was shot in the back twice. Unacceptable. The change has to be made and if you know who's going to make the change look in the mirror."

"I don't get to kick it with him tomorrow. Instead we have to put our money together and plan a funeral. How many times are were going to seat back and talk about the next one," said Henderson.

Holding back tear Savyna Simpson wants the world to remember her cousin, Davazia as a loving father who had a long life ahead of him.

"Devazia is my heart. He was like a brother to me. I love him and I'm going to miss him," said Simpson.

During the vigil community members also asked to pray for the suspects families. Police say there multiple shooters. A man was arrested today in connection with the shooting.

Authorities have received more than 100 images including videos and photos which could lead to more clarity and arrests in the coming days.