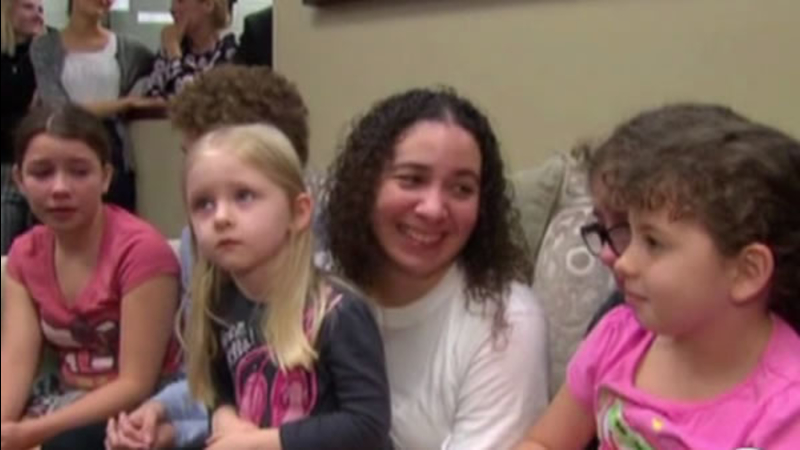 NUECES COUNTY, Texas -- A Texas woman is spending her first full day with her family in seven years after being released from jail for a crime she says she didn't commit.

A jury convicted Hannah Overton of killing her foster child back in 2006. She's been trying to prove her innocence ever since.

On Tuesday night, a Texas judge released Overton on bail after her conviction and life sentence was overturned in the bizarre salt poisoning death of the little boy she was trying to adopt.

ABC News was there for her emotional reunion with the five children she hasn't been able to touch from behind bars.

The 37-year-old mother was accused of force-feeding her foster son, Andrew Burd, enough salt to kill him.

Overton first sat down with 20/20 in 2008. "It's somebody's worst, worst nightmare after your child dies to be told that somebody thinks it's your fault," she said.

Convicted of capital murder, her husband Larry stood by her through it all.

When asked about the truth in the child's death, Larry answered, "That my wife did nothing wrong. That Andrew had something going on with him in his body and something happened with him that we don't know."

The jury never got a chance to hear from a salt poisoning expert who has long believed the 4-year-old ingested the salt on his own due to behavioral problems. After he testified during Overton's appeal, her conviction was reversed.

"Even with today's medical technology, under the best medical care, and major medical centers and even when it happens in the hospital, you die," expert Dr. Michael Moritz said.

Prosecutors stand by the charges and plan to try Overton again. Her current defense team, led by Cynthia Orr, says they will continue to fight to clear her name.

"We're so thrilled that she stands here presumed innocent, and we're very confident the state doesn't have a case," Orr said.

Just before her release, Overton told ABC News she has just one thing on her mind -- catching up on the years she's lost with her children.

When asked what she'd do with them, Overton answered, "Anything they want to do. I mean, just day-to-day things. Just being mom. Cooking dinner, washing, watching TV, whatever. All those things I've missed out on."