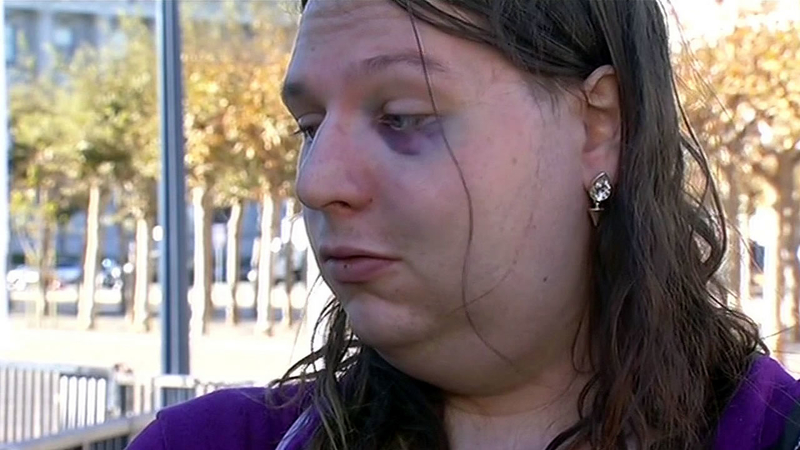 San Francisco police officers said they were on routine patrol when they came upon an altercation and are investigating it as a hate crime.

Even though the city is considered a safe haven for the LGBT community, this is the second violent attack on this woman this year.

Samantha Hulsey suffered a swollen jaw and a bruise under her eye after she was beaten while walking on 8th and Mission streets.

She was with her fiance Daira Hopwood when a couple started taunting them with homophobic and transphobic slurs. "Telling us we needed to get the hell up out of here," Hulsey said.

Police said Hulsey became the victim of a violent hate crime. "The hot coffee was thrown in her face as well as punches to her face and verbal threats against her," San Francisco Police Department Ofc. Grace Gatpandan said.

"There seems to be a common misperception that just because there's some trans-people on television portrayed in a positive light that everything is all fine and dandy now," Hulsey said.

In January, a man is accused of harassing her on Muni and stabbing her in the chest when they got off the bus.

A recent report by the San Francisco LGBT center found even in San Francisco's progressive environment at least 68 percent have experienced violence. "It's not okay anywhere, but here we have a reputation for being accepting," Hulsey said.

Two suspects who were identified as Dewaytne Kemp, 36, and Rebecca Westover, 42 are in custody in the county jail and face several felony charges.