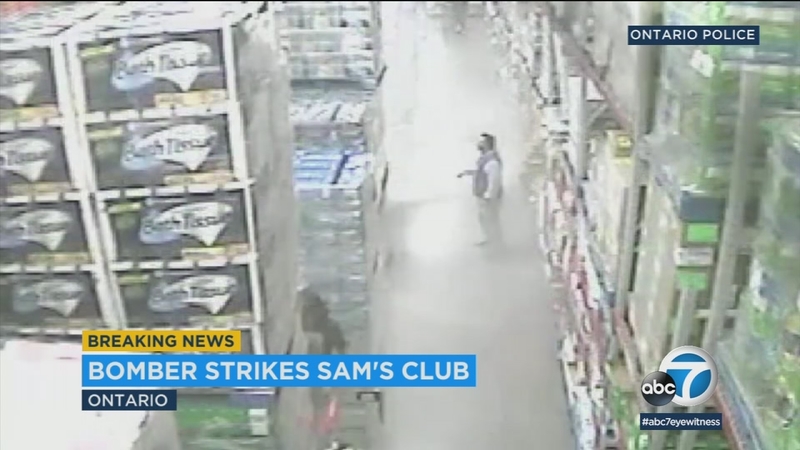 ONTARIO, Calif. -- Surveillance video from an Ontario Sam's Club shows aisles filling with smoke after the detonation of two explosive devices inside the store.

Customers can be seen in the video scattering as Sam's Club employees rush to put out the fire the explosion ignited.

RELATED: Neighbors of Austin explosion victims speak out after blast

A 49-year-old man was taken into custody after the incident Thursday. Police said Hugo Gonzalez, of Fontana, fled the scene after setting off the explosions and led officers on a short chase before he was arrested.

According to an Ontario Police Department spokesperson, the incident was initially reported at 2:08 p.m. as a structure fire after the caller heard a "popping sound" on aisle 4 of the warehouse store in the 900 block of Milliken Avenue.

Bomb squad personnel later confirmed that two homemade devices were detonated, but there were no injuries or significant damage.

"Each device had ignited small fires to products within close proximity," the police department said in a statement. "Sam's Club employees acted quickly and used fire extinguishers to put out the flames."

According to the Ontario Fire Department's bomb squad, the devices were set off at opposite ends of the store.

Police searched Gonzalez's apartment on Arrow Boulevard in Fontana and did not locate any additional explosive devices, but found more materials with which to make them.

Gonzalez was booked at West Valley Detention Center and is being held on $1 million bail.

According to authorities, Gonzalez has not provided a motive. Police said Gonzalez is not a Sam's Club employee and is not connected to any known criminal organizations.