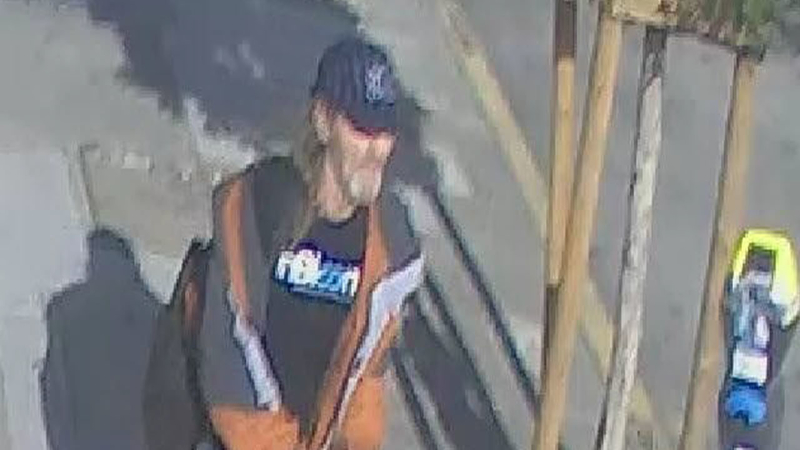 Earlier Friday, police released a picture of the man suspected of putting a body part in a suitcase Wednesday in San Francisco. ABC7News.com also has exclusive video showing the man and the suitcase before he dumped it.

The images police released earlier Friday are from a security camera taken in the neighborhood where the person dumped the suitcase containing the torso.

A medical examiner described the suspect as a light-skinned male.

Police spokesperson Albie Esparza said during a news conference Friday that "that person is described as a male, white, possibly 50 to 60 years of age. He's 5-foot-7 wearing a pin-striped baseball hat, blue and orange jacket and light blue jeans."

Police found the suitcase near Goodwill Industries on 11th and Mission streets. Inside was a headless torso. Then they discovered a leg in a garbage container in front of nearby Firestone Tires.

Other officers found important surveillance camera video from nearby businesses. The facial shots of the person of interest came from one of them.

ABC7News.com has now obtained another video which shows that same person lugging a suitcase on Howard Street, about two blocks from where it was dumped.

he man walks past the windows of the business, dragging the suitcase. He has the same baseball cap and clothing as seen in the close up images.

The video shows the man stopping momentarily at the far end of the restaurant, perhaps wondering where to go next. He's pulls the suitcase past the restaurant door and past its windows.

A source with knowledge of the police probe said another security camera recorded him wandering around Howard and 8th streets for more than an hour that day, also with the suitcase in tow.

Investigators believe the man is a transient.