ONLY ON ABC7NEWS.COM: 7 rescued from distressed yacht by 2 fishermen in the San Francisco Bay 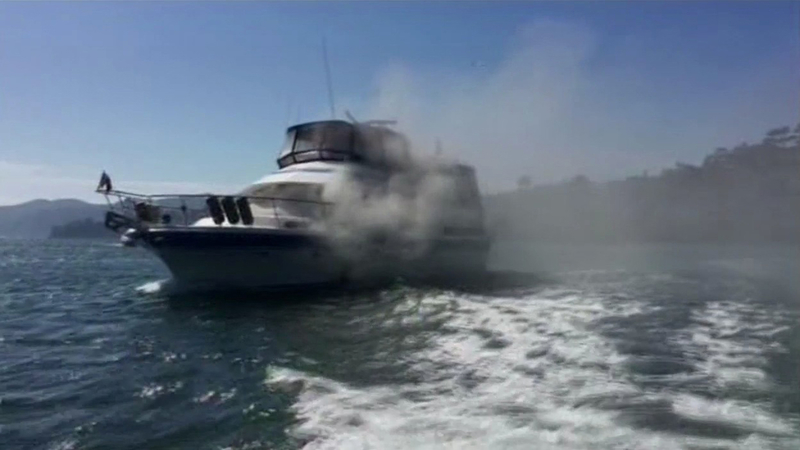 TIBURON, Calif. (KGO) -- A boat fire near Angel Island forced seven people to abandon ship and the survivors credit two fishermen for coming to their rescue. It happened in Raccoon Straight between the Tiburon Peninsula and Angel Island.

What started out as a beautiful day on the Bay among friends, quickly turned into a nightmare; smoke started pouring out of a 43 foot motor yacht and it appears the passengers were the last to know.

Heidi Kuhn was among the seven people on board.

"People were waving and I was waving back and not realizing that they were telling me there was smoke coming on board so we looked and very quickly put on our life jackets," said Kuhn.

Fortunately, two cousins out fishing for crab were nearby, although at first, they didn't think the smoke was a big deal.

"We thought it was a barbecue, so we didn't think anything of it. And a few minutes later we're out by the Golden Gate Bridge and we hear the distress call - 'mayday, mayday,'" said Justin Nguyen, fisherman.

Jimmy and Justin Nguyen turned around immediately, going full throttle to the burning yacht. They say their Zodiac RIB was the perfect boat in this situation.

"It's capable of getting right next to the other boat, fendering it, staying alongside in order for you to get people on or off the boat," said Justin Nguyen.

But even with the right boat, the rescue wasn't easy. The smoke was getting intense making it difficult to breathe. They had to get the seven people off quickly.

"I have to give credit to them also. They kept calm and collected the whole entire time so it wasn't really a panic situation," said Jimmy Nguyen.

The boat sustained significant damage. The cause has yet to be determined, but firefighters say it started in the engine compartment. Kuhn says she can't believe she survived the ordeal. She says she owes Jimmy and Justin her life.

"They really were the heroes. They really saved, in my humble opinion, seven people's lives today on the San Francisco Bay," said Kuhn.