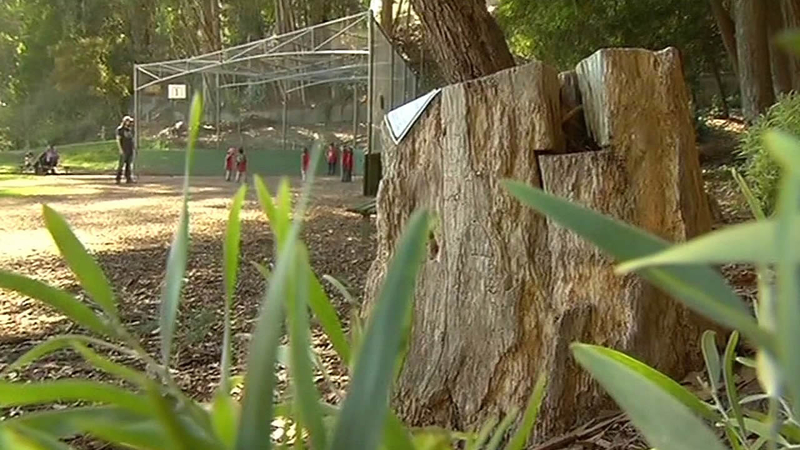 SAN FRANCISCO (KGO) -- A San Francisco woman is claiming a deadly carcinogen sprayed at a Bay Area park killed her dog. Now, Victoria Hamman is trying to make sure it does not happen to anyone else and is putting up some provocative posters around her neighborhood in Noe Valley.

She says it happened after an herbicide was used at Glen Canyon Park.

Hamman said, "I just decided to kind of take it to the streets and be a little provocative."

She lost her dog Barack last month to cancer. Her grief turned to action when she noticed warnings at one of her dog's favorite places, Glen Canyon Park. The city was going to use Monsanto's Roundup on tree stumps.

When asked if she was surprised that the city was using Roundup, Hamman said, "I was very surprised."

The herbicide has been linked internationally to cancer, so Hamman believes it could have been powerful enough to make her dog sick.

She told ABC7 News, "Nothing can be proven, but I believe there's a decent possibility that exposure to Roundup caused Barack's cancer."

She started spreading the word with posters that ask "Did Roundup kill my dog?" A poster like that got the people in charge to take a second look. The herbicide application now won't happen until the city reevaluates its plan.

Chris Geiger, with San Francisco's Department of Environment, says they are listening to this problem.

He told ABC7 News, "People should rest assure that if they are on Golden Gate Park on the grass or wherever there's not going to be pesticide on the grass."

The questions surrounding Roundup have gone from a one-woman campaign into a chorus of citizens wondering if a chemical linked to cancer should be used at all in San Francisco.