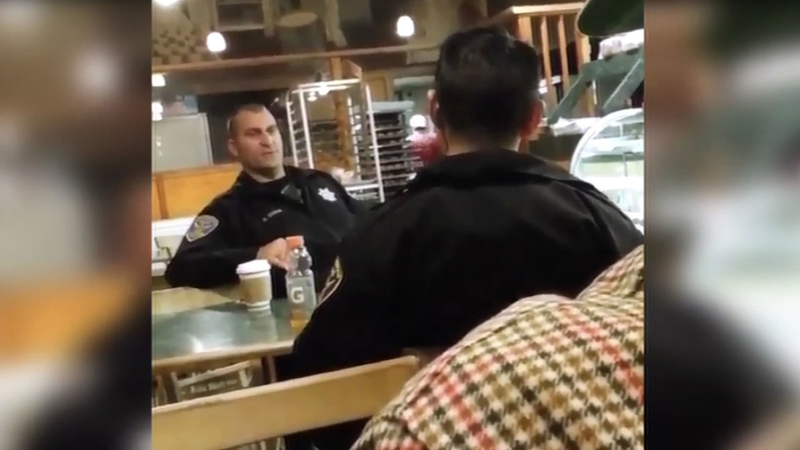 SAN FRANCISCO (KGO) -- San Francisco Police Chief Greg Suhr has ordered an investigation of two of his officers after they were videotaped while joking about body cams showing officer-involved shootings. That graphic conversation was posted on social media.

The chief was visibly irritated by what he believes was improper conduct in a public place by two of his officers. He told reporters he expects his officers to conduct themselves "as ladies and gentlemen with class."

But the police chief does not see decorum in a cellphone video that someone secretly took and posted on Instagram.

Two of his officers are chatting in a coffee shop about body cams, talking graphically about what they want the cameras to show and not to show during an officer-involved shooting.

One of the officers said, "But what do you look like? A dumb a***. That's what you see. What you want on video is the guy holding the gun, still going (expletive) and you know, still pointing at you."

In the second clip, the two talked about the body cam recording of what might happen when the gunman is shot.

The other added, "Blood splattered everywhere."

The first officer ended the video with, "Yeah, cherry pie all over the wall. Yeah. That's great."

The chief has ordered an investigation.

"This is not the graphic conversation an officer should be having, let alone in a public place," said Suhr.

"In my opinion, this is much ado about nothing," said San Francisco Police Officers Association President Martin Halloran.

"Two officers having a conversation in a cafe that they thought was private, I don't see it as a big issue," he said.

And Halloran certainly doesn't it as a violation of police policies.

"Some of the language such as blood splatter, that's graphic," he said. "But this is what police officers deal with on a daily basis and it's unpleasant sometimes what we're forced to encounter."

Body cams, Halloran says, is a popular topic now among officers. They could soon be wearing them if the police commission approves it.