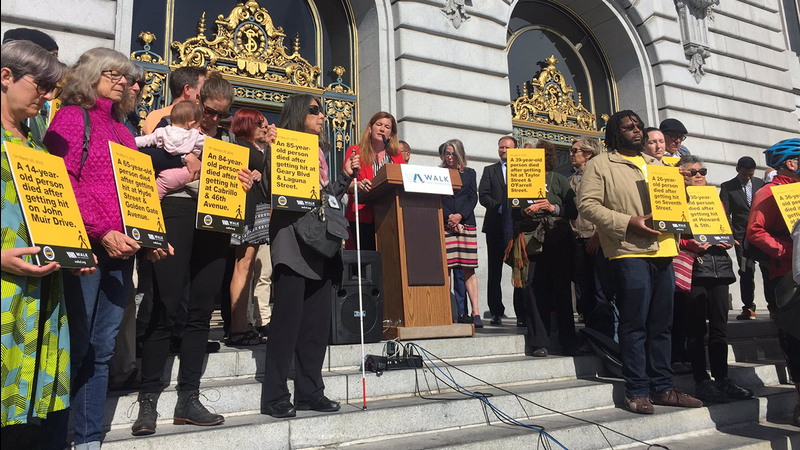 SAN FRANCISCO (KGO) -- Fourteen names were emotionally read from the steps of San Francisco City Hall on Tuesday morning. They were the names of the 14 pedestrians and cyclists killed on city streets this year.

"We have been failing for a long time," former police commissioner Suzy Loftus said. "When I have to stand here and listen to the 14 names and know one of them is a 14-year-old baby, who I attended her funeral because she was on my daughter's soccer team, this is a San

The groups of advocates called for a state of emergency in response to a devastating crash on Sunday.

A couple from the Fresno-area was in town celebrating their anniversary. In exclusive video obtained by ABC7 News, viewers can see a Tesla blow through a red light. Moments later, the vehicle hits Benjamin Dean and his wife Kelly. The impact sent the couple into the air and killed Benjamin.

Senator Wiener said San Francisco has the ability to get more red light cameras and needs to accelerate some projects to improve street safety.

The SFMTA told ABC7 News they're working on it.

"We hear the pain," Tom McGuire said. "We hear the frustration. We heard it at the podium today and I feel that every day. It's my job to translate that into real concreate changes on our streets."

According to Loftus, in the city and county of San Francisco, traffic fatalities are now on par with the number of homicides.

#HappeningNow pedestrian advocates are on the steps of City Hall calling for change. This group says too many lives have been lost due to traffic crashes. Speed is the #1 killer on our streets @abc7newsbayarea pic.twitter.com/DREur6PF2W

14 names are being read at the podium...these names are the pedestrians/cyclists killed in traffic collisions on #SF streets this year. This call to action comes after a couple was hit by a Tesla on Sunday. The husband died. Couple was in SF celebrating their wedding anniversary pic.twitter.com/RCTQWTcbAx

Former police commissioner Suzy Loftus says the number of pedestrian and cyclist deaths in the city and county of #SanFrancisco is on par with the number of homicides this year pic.twitter.com/pPesNXHf1T