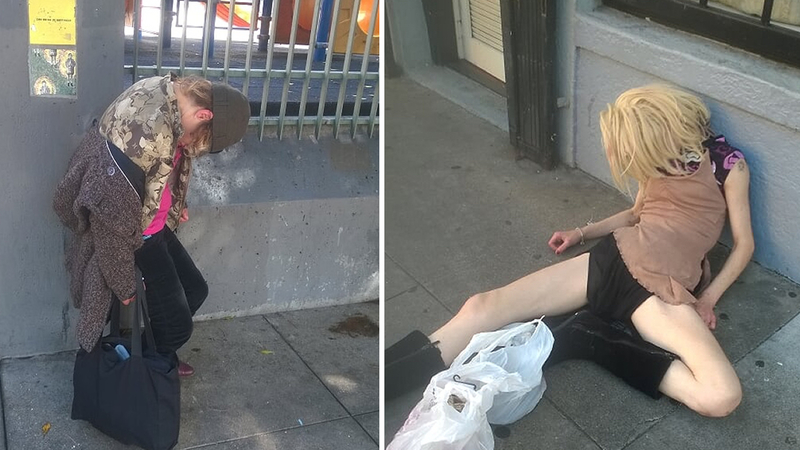 SAN FRANCISCO (KGO) -- The state of San Francisco streets has once again made headlines, this time nationally in the New York Times. In an article released on Monday, Oct. 8, the newspaper called the 300 block of Hyde Street the dirtiest block in San Francisco and compared it to "developing-world squalor."

Hyde Street resident Larry Gothberg has lived in his Tenderloin building since 1982. He has amassed a collection of photos, depicting what's happening just outside his door.

"When I first moved into the neighborhood, it wasn't like this. I think because of crack in the 90's. That's when everything went downhill."

Gothberg's block is littered with dozens of used needles, the odor of urine and feces, and those who appeared to be selling drugs.

Gothberg points to a man, hunched over across the street, unresponsive and not moving.

To be fair, the Department of Public Works says they receive a tremendous number of service calls from neighborhoods such as the Mission and Chinatown as well.

ABC7 News caught up with San Francisco Mayor London Breed for her take on the Times article.

"There have been, unfortunately, a number of articles that have criticized our beautiful city for the conditions of its streets. It's because people are not respecting the city and we all need to take responsibility."

Just over $70-million has been allotted to street cleanup. When asked what can be done to solve the problem, Breed references the times she witnesses bad behavior herself.

"It's why I'm getting to know the people and trying to understand what's going on. In fact, someone threw something on the ground and I said 'pick that up!'. He turned around and he said, 'Madame Mayor, I'm sorry, I'm sorry.' We have to have a conversation and not just overlook when somebody throws something on the ground. We have to change behavior and we have to hold people accountable. That's the next step in all of this."

RELATED: No safe injection sites for San Francisco -- now what?

While Gothberg is frustrated and believes the city's issues are often pushed into his neighborhood, he does think there's a silver lining to the New York Times article.