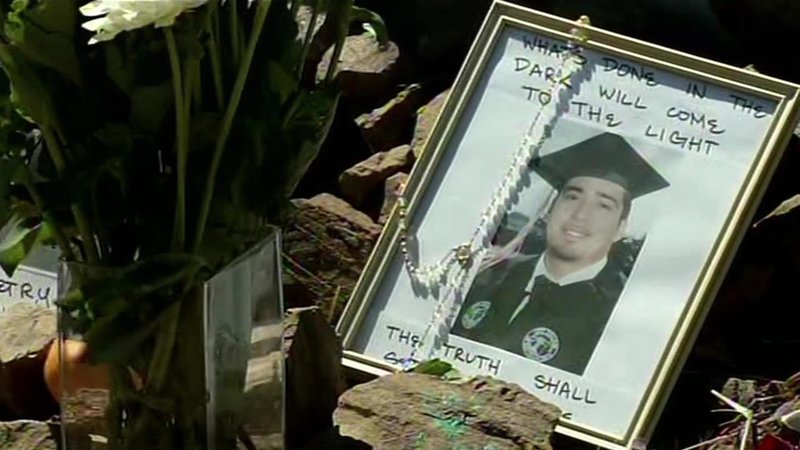 Lawsuit filed for man killed by SFPD in March

SAN FRANCISCO (KGO) -- An angry, but peaceful rally to mark a 5-month anniversary of the officer-involved shooting of Alejandro Nieto, 28, was held at San Francisco's Bernal Heights Park Friday afternoon.

The family says they have a lot of questions about the shooting and they don't believe the police department's account of what happened. Also, the medical examiner's report is not out yet and it has been five months, so the family decided to file a lawsuit to get some answers.

The family's attorney John Burris had filed the lawsuit earlier in the day. "This was a person who was not armed and we don't believe that the narrative of him pointing a Taser at the police officers at the time was true," Burris said.

The day started with a small sunrise gathering at the site in Bernal Heights Park, where Nieto was shot and killed.

Dancers marked the 5-month anniversary with an Aztec ceremony offering prayers and calling Nieto's spirit from the other world.

Maria Villalta is angry at what she calls a senseless police shooting. "Some policy changes need to happen. Officers need to have better training now and actually think before they shoot," Villalta said.

Police Chief Greg Suhr discussed the incident in the week following the fatal shooting, explaining that a call came into police at 7:11 p.m. on Mar. 21 about a man at Bernal Heights Park wearing a bright red jacket with a black handgun on his hip pacing by a chain link fence near a bench.

The chief said the caller described a man eating either chips or sunflower seeds with his hand resting on what looked like a gun.

Officers arrived at the park within minutes and encountered Nieto with what they believed to be a gun in a holster while standing about 75 feet away with his back against the setting sun.

Suhr said Nieto pointed his weapon at several officers, prompting them to fire multiple rounds at him.

"They fired in defense of their own lives," Suhr said.

Nieto was pronounced dead at the scene.

Suhr said the officers thought Nieto had a firearm on him, but after the incident it was determined that because of mental health reasons, Nieto was prohibited from legally owning a gun.

He had only a Taser stun gun on him at the time of the incident and Suhr said it could have been misconstrued by officers as a real gun.

But Nieto's family and friends say witnesses tell them he never pointed the Taser at officers. They hope a federal lawsuit will help clear the air. "We want the truth. We want transparency here that will help the family cope with this very devastating loss. It will help the community heal," Benjamin Bac Sierra said.

An internal police investigation has cleared the officers involved in the shooting. But those at the rally want another review by the California Department of Justice.