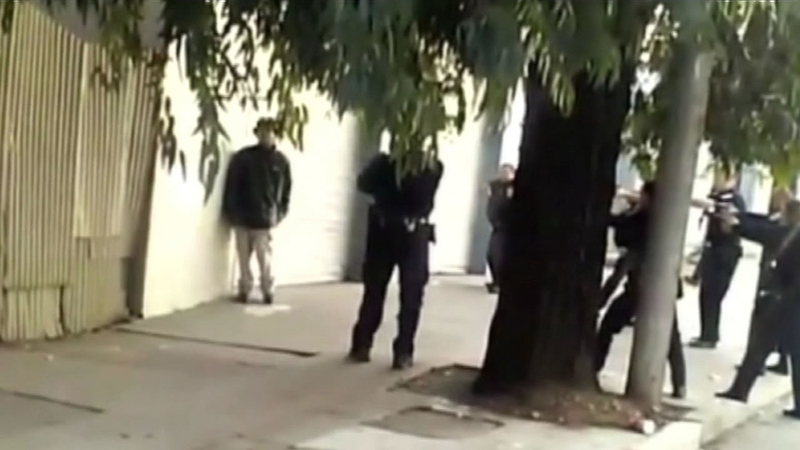 SAN FRANCISCO (KGO) -- San Francisco police officers shot and killed a man Wednesday afternoon in the Bayview District and part of the shooting was captured on cellphone video.

Police say the man who officers shot and killed was wanted in a stabbing that had happened nearby less than an hour before. They describe him as a man in his 20s and have not yet released his name.

A witness posted video of the shooting on Instagram. In it you can see the man walking toward an officer. In the video, someone urges the man to "just drop it," then seconds later a number of shots ring out.

The police chief says that man had a 6-8 inch knife in his hand. He says five officers fired their weapons, killing him.

San Francisco Chief Greg Suhr explains what happened leading up to the shooting. He told the media police "deployed standard bean bag gun several times striking the suspect. He did not drop the weapon. They called for a higher powered, less lethal -- that was deployed. It actually knocked the suspect to the ground. He did not drop the knife, he got up again."

The shooting happened around 4:30 p.m. It was just before 4 p.m., that police say a man who'd been stabbed in the shoulder walked into the police station. He described his attacker to police and officers tracked-down that man.

"Still armed with what appears to be some sort of kitchen knife, that they assume was the knife that he used in the stabbing," Suhr said.

The stabbing victim will survive.

One neighbor says it's too soon to take sides. San Francisco resident Michael Ngo said, "Hopefully, it's justified but until more information comes out, then that's where I'll place my judgment."

That 14 second video shows one part of the story, but police are asking anyone else with video of this shooting to come forward.

#SFPD OIS in the Bayview. Media staging area will be on Gillman St. East of 3rd St.

The officer-involved shooting comes as the San Francisco Police Commission was considering policies Wednesday evening for body-worn cameras by the Police Department's officers. The cameras, not yet worn by officers, are slated to be deployed in San Francisco sometime in 2016.