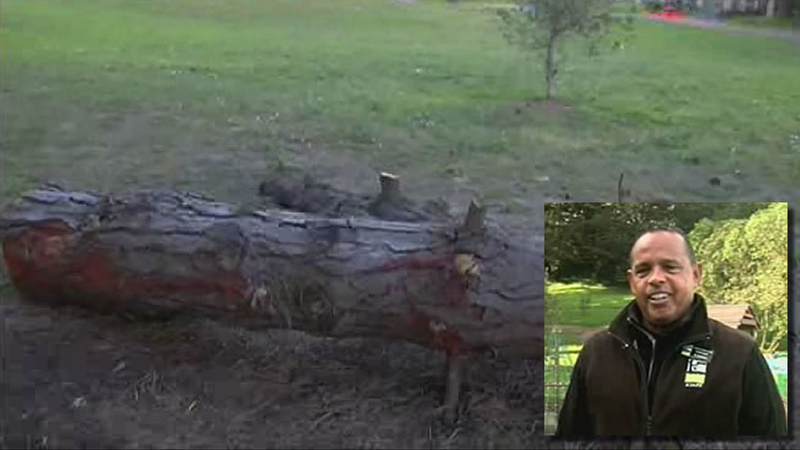 SAN FRANCISCO (KGO) -- We're glad to report that a San Francisco Rec and Park Department manager is doing a bit better after nearly being killed by a falling tree. It happened Thursday in Hilltop Park, in the Bayview District. He is at San Francisco General Hospital where he's being treated for very serious injuries.

Robert Watkins was taken to the hospital in critical condition, but is now listed in fair condition. Meantime, Cal/OSHA is investigating what happened to determine if Rec and Park is at fault.

Earlier this year, a Watkins appeared in a Recreation and Park promotional video. On the video he says, "My name is Robert Watkins. I'm the parks services manager."

Now, he's in the hospital with a back injury, broken ankle and concussion. On Tuesday, he was with crews trimming trees in Hilltop Park, in San Francisco's Bayview District when a tree unexpectedly came crashing down. A fire department spokeswoman says Watkins tried to get out of the way, but was hit in the back and trapped under the branches. Watkins is expected to recover and he's lucky.

"We have seen accidents, some of them fatal, because of trees that fell on workers," Cal/OSHA spokesman Peter Melton said.

Cal/OSHA says tree trimming is dangerous work, whether you're in the tree or on the ground. The agency is investigating this incident to determine if safety procedures were being followed. If not, Rec and Park could be cited.

"Those citations can come with monetary penalties depending on severity of violations," Melton said.

Cal/OSHA has six months to complete its investigation.

Rec and Park has released a statement about Watkins. It reads in part: "He is a longtime, dedicated member of Rec and Park's team and we wish him a speedy and full recovery."